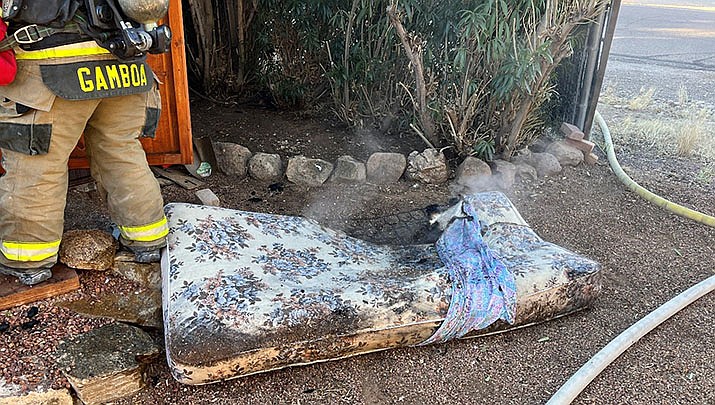 Firefighters from the Northern Arizona Fire District prevented further damage when they extinguished a mattress fire caused by smoking in bed the morning of Monday, Nov. 21. (NAFD photo)

KINGMAN - The Northern Arizona Fire District cut the losses of a resident on Monday, Nov. 21 after a mattress fire was caused by smoking in bed.

Firefighters were called at 08:33 a.m. to a structure fire in the 1400 block of N. Devlin Ave. near Kingman, NFD wrote in a news release.

NAFD responded with two engines, while Kingman Fire responded with a ladder truck. Upon arrival, firefighters found smoke coming from a casita used as a living space.

Initial attack found a mattress on fire. A search of the structure was completed. There was no one inside, and a small dog was rescued. The fire was quickly extinguished, and damage was confined to the mattress and box springs.

Evidence shows the cause of fire was smoking in bed. Additionally, there were no smoke detectors installed.

The Red Cross has been contacted to provide assistance.

As a reminder, please make sure you have working smoke detectors anywhere someone is sleeping. Smoking in bed never has a good outcome, NAFD wrote in the news release.

(This story has been changed to correct a spelling error by changing bid to bed.)