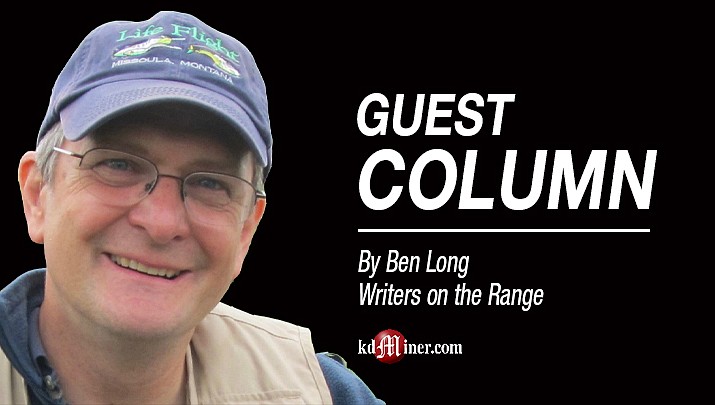 Imagine you were part owner of a nice piece of rural land, maybe with a trout stream running through it. But your neighbors won’t let you in. You don’t have to imagine, because access to far too much public land is legally blocked by private property owners, causing headaches throughout the West.

If you look at a map of the region, big tracts of land run in a “checkerboard” pattern of mixed public and private land ownership. The West is literally diced up into alternating square-mile sections of federally managed land and private ground, which is generally owned by a timber company or ranch.

This is not a small problem. Researchers have found that 8 million acres of public land are “landlocked” in 11 states. That’s roughly equal to the area of four Yellowstone national parks.

This land ownership pattern has been causing headaches since it was rolled across the West in the 1860s. It dates back to the days of Abraham Lincoln, when the federal government granted land to railroads as incentives to span the continent with tracks, thus opening up the West for development.

Unintended consequences continue to fill up courthouses. This year, in Wyoming, the absentee owner of a 22,000-acre ranch wasn’t happy when four hunters crossed from one section of public land to another, thanks to a makeshift ladder they raised at the corner of his private land.

Once the hunters from Missouri accomplished their “corner crossing,” the ranch owner convinced a local prosecutor to file trespassing charges. After a jury failed to convict, the ranch owner was not satisfied.

He filed a civil case, claiming that by merely crossing his land at the corner, the hunters had decreased the value of his property. To be clear, the hunters never stepped foot on his land. But the landowner claimed they violated the “airspace” over the corner where properties met. The suit charged that the loss of exclusive access to his land caused millions of dollars in damages.

The case is being watched closely around the country. Access advocates have raised tens of thousands of dollars in donations via GoFundMe accounts to help pay legal costs for the hunters involved. They hope that a victory in Wyoming will have beneficial consequences elsewhere.

But a victory for public land access is far from automatic, even if a Wyoming judge or jury agrees with the hunters in civil court. The question remains: Where do public rights stop and private property rights begin?

Legislatures across the West will be under political pressure to resolve the issue, and conservative legislatures could pass a law giving private landowners authority to block “corner crossing.”

Under that scenario, the public would lose. Yet there are proven tools to protect access in checkerboarded landscapes.

All that’s required are private landowners who don’t hanker for a showdown.

Where I live in northwestern Montana, checkerboard landscapes were the norm, and when I went hunting I often had no idea whose land I was on. Public or private, though, didn’t matter, because visitors were welcomed by both.

That changed when timber companies shifted their focus from sawing lumber to selling real estate. Thousands of acres suddenly fell behind “No Trespassing” signs or fences put up around trophy ranches.

Luckily for me, groups like the Trust for Public Land and the Montana Department of Fish, Wildlife and Parks worked with willing landowners and elected officials to secure public access. Today, every major timber company in Montana has a conservation easement allowing the public to enter at least part of their domain. This has helped secure access around fast growing resort towns like Whitefish and Columbia Falls.

Meanwhile, then-Sen. Max Baucus brokered a huge deal where the federal government bought thousands of acres in the Swan River Valley, making the land state forest or national forest. Thankfully, there are sources of money through the Land and Water Conservation Fund that can pay for such solutions. Land trades are another way to settle the issue.

David-vs-Goliath fights between hunting parties and wealthy absentee landlords generate a lot of passion, and perhaps the disputes will conclude by securing more rights for everyday folks to enjoy public land.

But larger solutions will require more people willing to work together, and a lot more money on the table. Not everything needs to be settled in court.

(Ben Long is a contributor to Writers on the Range, writersontherange.org, an independent nonprofit dedicated to spurring lively conversation about the West. He is senior program director for Resource Media in Kalispell, Montana.)