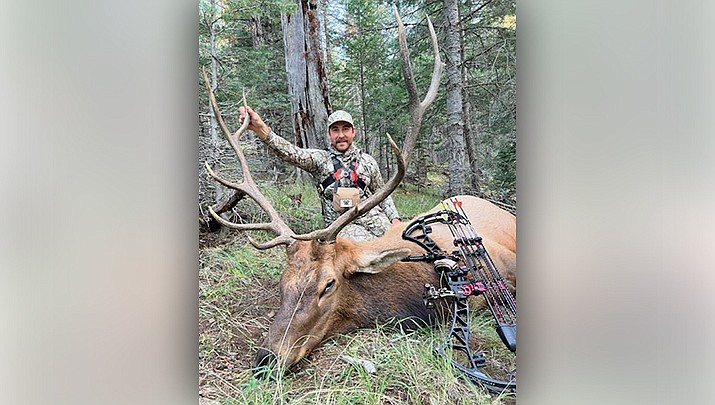 Jimmy Herrero displays the 6X5 bull elk he bagged with a bow near Flagstaff this fall. (Courtesy photo)

Taking a bull elk with a bow and arrow on your first archery elk is quite a feat, but Kingman resident Jimmy Herrero accomplished that recently on a hunt near Flagstaff.

Herrero has been a hunter and angler for a long time. The son of long-time Kingman residents Joe and Sarah Herrero, he has done a lot of hunting and fishing.

A couple of years ago, he decided to take up hunting with a bow and arrow.

In 2021 he bagged his first big game animal with a bow, a mule deer buck near his home in the Hualapai Mountains.

He also drew a bull rifle elk tag in Unit 10, and he bagged a very nice 6x6 bull there.

This year Herrero applied for an archery bull elk tag in Unit 11M, which is located on the outskirts of Flagstaff.

Lady Luck smiled and Herrero drew one of the 80 bull tags offered for the late archery hunt in Unit 11M.

With a tag in hand Herrero stepped up practicing with his Bowtech compound bow. “I shot 10-15 arrows every day,” Herrero said. “I felt confident that I could shoot out to 60 yards.”

Preparation is important when planning a hunt; and before this one ended, Herrero’s daily regimen of practicing paid off.

This year bow hunters in northern Arizona faced a lot of challenges. A super wet monsoon made the forest green and water available everywhere.

And if that wasn’t enough, Herrero’s hunt was the second in this unit, and besides the 79 other bull elk permittees, there were 80 antlerless hunters out there on his hunt, too. The elk had already been hunted for a couple of weeks prior to Jimmy’s hunt opening, so they were already on high alert.

The unit is a metro unit; which means Jimmy would be sharing the woods with a lot of other recreationalists, including hikers, bikers, ATV and UTV enthusiasts.

But again, prior planning which included pre-season scouting trips by Jimmy and his family had given the hunter ideas on where to start his hunt, which was open for 14 days.

On opening weekend of the hunt, Jimmy’s wife, father, brother and a family friend were in camp to assist in case Jimmy got lucky and bagged a bull.

Jimmy could have shot at a bull the first evening of the hunt, but he wasn’t comfortable taking the shot that was presented.

As the weekend progressed, the hunter saw a lot of wildlife, but never had another opportunity for a bull.

On Monday and Tuesday, Herrero would be alone on his hunt.

It was Tuesday evening when Jimmy got an opportunity.

“I heard a couple of bugles, one on my left and one on my right,” Herrero said.

Then started the cat and mouse game that elk hunters often play with bugling elk. It was 5 p.m. but there was still over an hour of shooting light left.

One of the bulls got to within 60 yards of Herrero, but the thick trees didn’t allow a shot. As the bull started to walk away, Herrero decided to try a technique that has been successful for elk hunters for eons.

“I picked up a stick and started raking a tree,’ Herrero said. “When the bull heard that, he immediately turned around and started walking towards me.”

Raking a tree mimics a bull raking his antlers, and when the bulls are in rut, sometimes they just can’t resist the urge to fight, so they respond.

The bull came in to about 25 yards and started circling, looking for the bull it felt was there. As the bull moved through the trees, the range increased to 37 yards. Herrero gave a soft cow call and the bull stopped and was standing broadside.

Despite his nerves, Herrero’s shot was perfect.The arrow zipped through and mortally wounded the 6X5 bull. The bull was heart shot, and ran just 70 yards before expiring.

As any elk hunter will tell you, when you find your bull, the fun is over and the work starts.

Herrero was over a mile away from his truck and all alone. With not much service on his cell phone, he started making calls.

His first call was to a friend of his father’s, then he called a friend in Flagstaff who said he and his wife would come out to help.

As the husband/wife were leaving they saw a neighbor and asked him is he wanted to go and help. Of course, he said yes.

Even with the four people who came out, there was a lot of work to do. It took two trips to get all the meat out of the forest. Herrero himself would make two trips loaded with meat.

It was 11 p.m. when the group finally got out of the forest.

Herrero took the meat to Casey’s processing in Flagstaff. He decided that he is going to do a European mount on the skull and antlers of his first bull.

For this Kingman resident, it had been an experience of a lifetime, and now the Herrero family will enjoy a lot of fine eating and healthy meat from the bull.

Besides seeing and hearing bull and cow elk, Herrero saw a lot of mule deer, about 40 antelope, and even a few coyotes. He saw a fresh bear track, but never actually saw any bears on the hunt.

Herrero said his wasn’t the biggest bull he saw. The largest bulls had between 30-40 cows and calves with them. “You just can’t get close when you’ve got all those eyes, ears and noses watching you,” he explained.