Semi collision results in a death and interstate shutdown 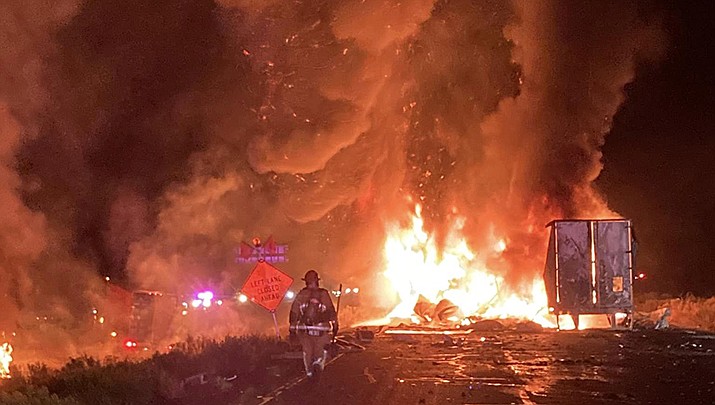 A semi-truck crash on Thursday night resulted in one death after the vehicle caught fire. Interstate 40 was closed throughout the night and has since been reopened. (Photo courtesy of Kingman Fire Department)

KINGMAN — A two-vehicle fatal collision in the eastbound lanes of Interstate 40 at milepost 55.5 in Kingman shut down the roadway on Thursday, Oct. 13.

According to the Arizona Department of Public Safety, at around 6:30 p.m. on Thursday a tractor-trailer was heading eastbound on I-40 in a speed-reduced construction zone. A semi struck the rear of another tractor-trailer causing the second semi to go off into the median on the left.

According to law enforcement, the at-fault semi immediately caught fire and the driver was ejected. The driver was transported to a nearby hospital where he was pronounced deceased. The driver of the second semi that was struck from behind received no injuries.

I-40 was shut down in both directions for several hours later but has since reopened.

The notification process for the deceased driver has not been completed.