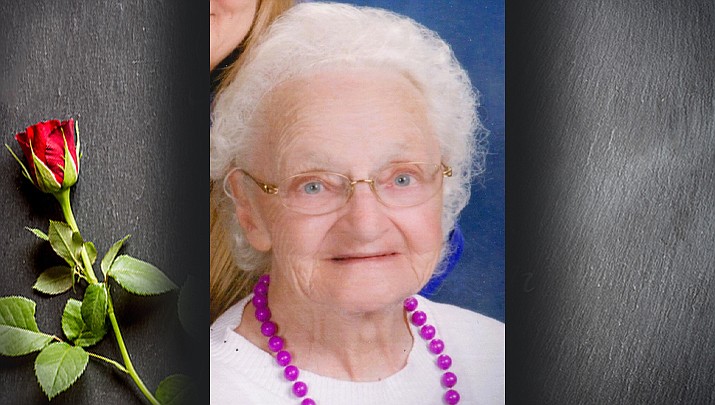 Helen was born in Elmira, New York on Jan. 25, 1926, to Richard W. and Gertrude A. Smith. She was raised by her paternal grandparents Robert E. and Clara A. Smith after her parents died when she was young.

Helen quit school after the sixth grade to work on the family dairy farm. In 1944 she met Earl Richard Trough, and on Oct. 17, 1944, they were married. They have one daughter, Carol Beale (Trough).

Earl and Helen moved frequently while Earl was in the military. After the military, in 1961, they moved to Kingman, Arizona where Earl went to work at a gas station and Helen began a long career dishwashing. Helen enjoyed family and was active with her church community over the next six decades, including fellowship groups, camps and weekly services.

Helen is proceeded in death by her parents, and her husband Earl. Helen leaves behind her daughter Carol Beale, grandchildren, and great-grandchildren.

Helen was kind-hearted and easy to enjoy time with. She was loved by all who knew her whether as a friend, family, mother, grandmother or mini-grandma.