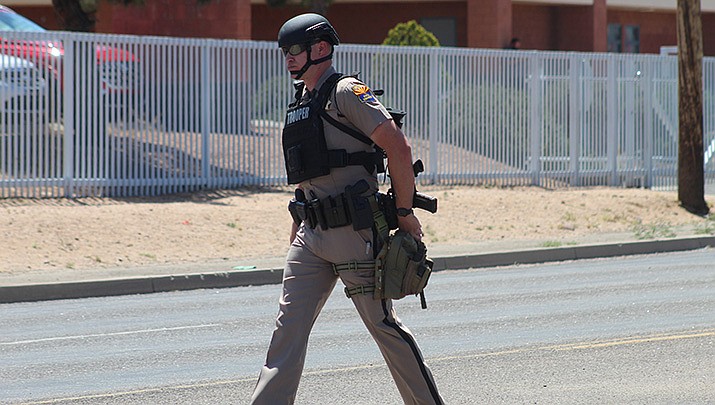 A state trooper is shown outside Kingman High School during a lockdown for a suspected shooter in May, 2022. In a more recent incident, two girls attending the school were suspended and charged with a felony after creating what the Mohave County Sheriff’s Office called a list of individuals they intended to harm. (Miner file photo)

KINGMAN — Two Kingman High School students were charged with making a terroristic threat, a class three felony, after allegedly making a list of classmates they intended to harm.

The Kingman High School school resource officer notified MCSO detectives on Wednesday, Aug. 31, and they began an investigation into the allegations. Interviews with applicable students were conducted on Wednesday and Thursday. Deputies provided additional security on Thursday.

The two students had allegedly comprised a list of students they intended to cause harm to, MCSO wrote in the release. The list was later recovered from one of the students and had the names of 14 students they allegedly intended to target. The parents of those students were immediately contacted and advised of the threat.

At the conclusion of the investigation, detectives arrested the two juveniles involved. They were both charged with making a terrorist threat, a class 3 felony, and booked into the Mohave County Juvenile Detention Facility.

“The Mohave County Sheriff’s Office has a zero-tolerance stance against any threat or disruption to our educational facilities, their students or their faculty,” MCSO wrote.