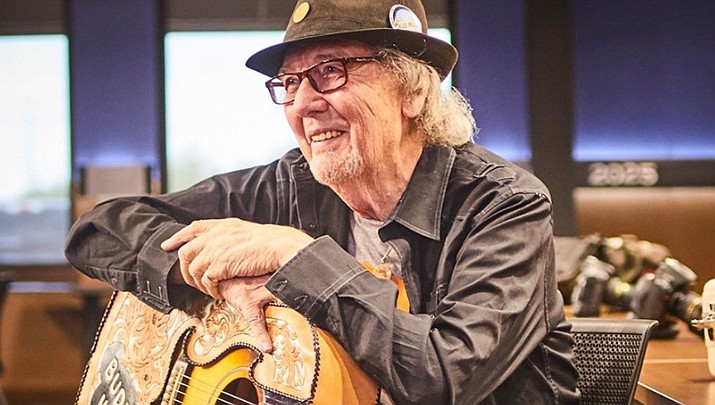 It is with heavy hearts we share with Buddy Holly fans and Rockabilly aﬁcionados that our Dad, Sonny West, most notably the songwriter of “Oh Boy” and “Rave On,” passed away Sept. 8, 2022, at the age of 85, in Grove, Oklahoma.

Sonny West was born as Joe Bob West in west Texas on July 30, 1937 to Joseph and Alberta West. He lived in Grove, Oklahoma the last two years of his life. Sonny continued to write songs throughout the years. He was a man of many talents though, being a self-taught silversmith and artist of beautiful silver and turquoise jewelry inspired by the Native Navajo and Zuni American Tribes of New Mexico. Sonny was also an inventor.

He single-handedly manufactured vinyl record needles for jukeboxes around the world. In more recent years, Sonny was a maker of several styles of guitars showcasing that special sound of a bygone era. Many of us in Sonny’s world, felt he was there at the very beginning of real Rock-n-Roll music, and fortunately crossed paths with Buddy Holly at just the right time, when they were mere teenagers. And now, he is one of the last to close out that era. Before his songs made the Billboard charts with Buddy Holly’s rendition, Sonny had recorded the double-sided 45 record “Rock-ola Ruby” and “Sweet Rockin’ Baby” in 1956. These songs are considered by many to be the beginning of the Rockabilly genre, which of course led to what we now know as Rock-n-Roll music. Sonny is one of the original inductees of the Rockabilly Hall of Fame, the West Texas Musicians Hall of Fame, and is a recipient of BMI’s Million Airplays Award.

His songs have been recorded by scores of artists and featured in dozens of television shows, ﬁlms, documentaries and television ads. Until recently, Sonny performed in live shows in Europe and the U.S., entertaining fans with his well-known classics. He was proud to be a part of the rich history; his music had been an integral part of. He is survived by one sister, two daughters, Diana Bickman (Daniel) and Sandy Haynes (Ron) all of Grove, Oklahoma; two stepsons, a stepdaughter, four grandchildren, and many nieces, nephews and cousins. He was preceded in death by his wife, Dottie.

A closed casket visitation will be from 5 p.m. to 7 p.m. Tuesday, Sept. 13, 2022, at Nichols Stephens Funeral & Cremation Services, Grove, Oklahoma. Burial will be at 2 p.m. Wednesday, Sept. 14, 2022 at Chillicothe Cemetery in Chillicothe, Texas. A public “Rave On” Celebration of Music will also be planned for Nov. 13, 2022, in northeast Oklahoma. For information about attending please email:, RaveOn.SonnyWest@gmail.com. In lieu of ﬂowers, please send support to the Buddy Holly Educational Foundation. (tbhef.org)