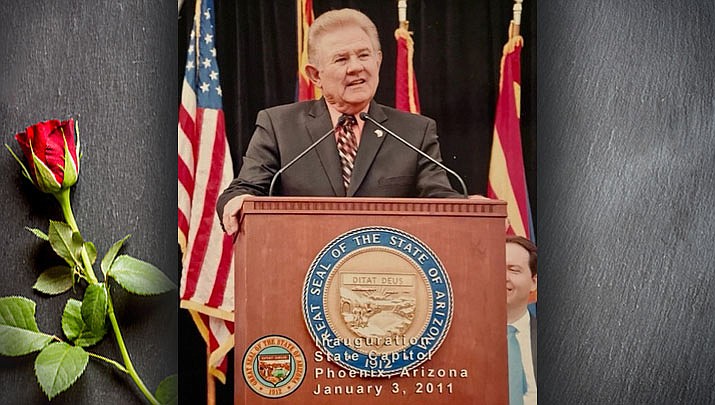 Joseph Elmer Hart was born May 8, 1944, in Kingman, Arizona, to Kenneth “Dick” Hart and Helen McDermott. Joe was the seventh and final addition to the Harts completing a family of three boys and four girls. He was a fourth-generation Arizonan and a lifelong resident of Mohave County.

Some of Joe’s fondest childhood memories were spending his days riding his horse around town from sunup to sundown and sitting at the counter of his mom’s diner, “The Chocolate Shop,” on Fourth Street. Always on the menu was the Joe Hart special: a cheeseburger, fries and chocolate milkshake. He enjoyed spending the summers outdoors exploring Boulder Springs, dancing at community dances, and working alongside his dad in the family’s mine. His parents instilled in him the value of a hard day’s work early in life. Joe would be known for his work ethic and for his aversion to “burnin’ daylight.”

Joe attended elementary, junior high and high school in Kingman, Arizona, where he met many lifelong friends, including Donnie Ely, Billy Logas, Bob Ware, George Logan, Alan Dusho, and many others. The shenanigans these guys got into are legendary and they were darn lucky social media wasn’t around. However, their stories will live on with their children and grandchildren.

Joe married Rhonda Kay Reeves on Sept. 4, 1967, in Las Vegas, Nevada. Rhonda was an only child and they eloped. It would take years for Joe to earn the title as “favorite son-in-law” after eloping with their only daughter. Joe and Rhonda were sealed in the St. George temple in 1972 and recently celebrated their 55th wedding anniversary.

Joe met Rhonda one night out dancing and knew he had found his dance partner for life. They loved to dance. Watching them dance was, as a friend said, was “like watching poetry in motion.” Together they had four daughters affectionately known as the “Hart Girls” – Cari Jo, Trisha, Jodi and Amy. His daughters, his wife Rhonda, grandchildren, and great-grandchildren were his pride and joy, and he never hesitated to brag about them. Joe considered himself the “luckiest man” to be blessed by such a wonderful family. He loved his family fiercely and was their ultimate protector and provider.

Professionally, Joe worked at the Duval mine for 20 years as a safety foreman. Some of Joe’s strongest friendships were formed there. His crew was a second family and they watched out for each other on and off the job. The Duval families and the friendships would continue throughout his life.

Joe worked his weekends and nights ranching. He started ranching with Flay Peterson in the 1970s. Flay was Joe’s mentor and taught him much about the cow business. Upon Flay’s retirement, Joe and Rhonda bought the Black Mountain Cattle Company in 1979. Ranching was his true love, passion and therapy. He spent countless hours hauling water, patching water lines, punching cows, branding and moving cattle. His passion for ranching was sparked the moment he rode his first horse.

Joe spent summers in St. George, Utah with his brother Bud, where he broke horses for local ranchers. For his efforts, Joe would get a new pair of cowboy boots to head back to school each Fall. Bud said Joe could ride anything and would bet on him in match races. One time Joe was riding an especially rank horse and ended up getting bucked off. The wild ride ended with a trip to the hospital for Joe and a payday for Bud. Bud bragged about that epic dismount for years. Joe was most comfortable in the saddle and was an expert horseman. Both Joe and Bud would live by the motto: “You can never be without a good horse.”

Another passion of Joe’s was cars. He loved anything fast and sought out a race. While his bother Bud kept him in horses, it was his brother Bobby who made sure he had a nice car. In high school Joe had a 1959 Chevy Impala convertible that he souped up and raced the quarter mile uptown any chance he had. He was an expert at the holeshot! This hobby would be the source of consternation with Rhonda because Joe felt compelled to save any car or pile of metal he saw abandoned. His daughters say he was a collector of precious metal and an expert in long-term restoration.

In 1984 Joe and Rhonda bought KGMN FM, a local radio station in Kingman. In the years to come they would add KYET, KZKE, TV 36 and TV 23 to their broadcasting business. Joe would say the secret to a successful cowboy was to have a wife who worked in town. So, Rhonda worked in town running the radios stations. Joe and Rhonda excelled in the radio business as it was a natural fit. They both had a deep appreciation for music. The radio station brought many opportunities to connect and serve the community. The radio business also led to Joe’s next hobby: interviewing and entertaining country music legends. Throughout his life Joe would interview country music stars such as Merle Haggard, Johnny Cash, Mel Tillis, Tammy Wynette, Reba McEntire, Kenny Rogers, Hank Williams Jr., Waylon Jennings, George Jones, Mel Tillis, Garth Brooks, and so many more.

Joe was a lover of the country music greats and considered many of them friends. He had an especially close relationship with Charlie Daniels and Willie Nelson.

In 1992, Joe was elected to the Arizona House of Representatives. He served in the state House for 10 years, as Speaker Pro Tempore, as well as chairman of several influential committees, including Public Institutions, and Environment and Government Operations. Joe often joked that there is a civics teacher rolling in his grave at the thought of Joe Hart being an elected official. Joe’s time in the Legislature would generate some of his most treasured memories. Joe held those he served with in the highest regard and counted many as his closest friends. He was a strong leader on Western state issues such as water rights, agriculture, mining and highways. He served on the Interstate 11 commission and was instrumental in getting Highway 93 designated as part of the NAFTA trade corridor.

In 2006, he was elected Arizona State Mine Inspector, where he served for 15 years until his retirement in 2021. Joe became the first statewide elected official from Mohave County. This position allowed Joe to draw upon his mining roots and use his legislative experiences to further protect and serve the citizens of Arizona. His top priority was to make Arizona safe for its residents to live, work and recreate. He led the effort to identify, fence and close Arizona’s abandoned mines. Joe spearheaded the educational campaign “Stay Out Stay Alive.”

His public service was the honor of a lifetime. He took the oath of office with pride and respect, recognizing the trust that was placed in him. Joe proudly served under five governors during his legislative and state executive service including governors Symington, Hull, Napolitano, Brewer and Ducey.

Joe passed away in Cedar City, Utah, on Sept. 11, 2022, from complications of kidney disease. He was surrounded by his family as he peacefully passed on.

Joe was a friend to all. He lived a fulfilling life and often compared his life to the Alabama song “I’ve loved a lot more than I’ve hurt.” Joe had many titles in life, but the ones he most cherished were Sweetheart, Dad, and Papa. He will be remembered as a loving husband, father and Papa. He also said “he loved his life so much that he would do every footprint over again.”

Joe was a true gentleman, a respected statesman and a man of great faith. His compassion and loving “HART” were his hallmarks. He performed quiet acts of service daily. Joe also had the greatest respect for service men, women and veterans. He never missed the opportunity to thank them for their service. In lieu of flowers the family asks that you follow Joe’s example and perform an act of service for someone or, thank a service man, woman or veteran for their service.