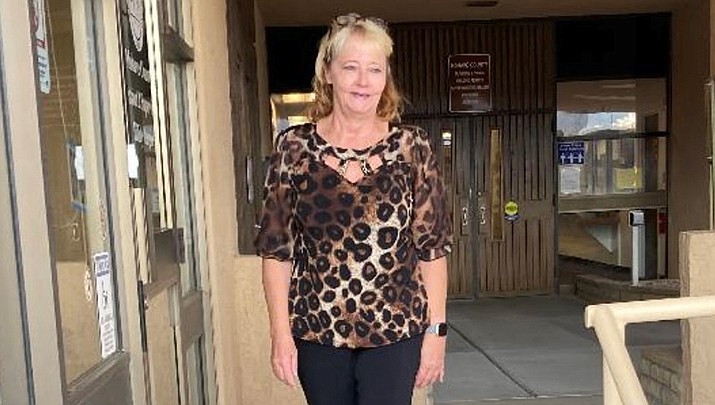 KINGMAN – Karen Flenniken was born in Los Angeles, but, as she was being raised by her grandparents for the first 12 years of her life, she spent every other weekend and a month in the summer every year until 1973 in Mohave Valley’s Willow Valley Estates.

So, she had some early upbringing in Mohave County that has remained with her in a positive way until this day.

Flenniken is the executive assistant to District 2 Mohave County Supervisor Hildy Angius and says she thoroughly enjoys her work.

Her route to the position has been an interesting one. She graduated from Glendora, California’s Citrus College in 1980 and took her Cosmetology degree with her to a salon until 1987. That year, she never looked back as she moved to the county permanently and started working across the Colorado River from her Bullhead City home at the Riverside Casino as a change person, becoming the slot manager in 1993. Working at the Riverside, she became the first female to work in the Sportsbook department and they gave her the nickname “Jackie Robinson.”

From 2004-13, Flenniken studied or held positions as a paralegal. In those latter years she worked for future county supervisor (and judge) Steve Moss at Kelley, Moss and Holden.

When Moss ran for and won his supervisor job in District 5, she was asked to join him in 2013. She accepted and now knew she was doing exactly what she was meant to do.

After 18 months with Moss, Mohave County District 2 Supervisor Hildy Angius came calling and asked for Flenniken to join her at her Bullhead City office. Location played a part in her acceptance as the Colorado River community was where she lived.

Angius has given Flenniken many opportunities to have an important and active role in District 2.

She has served on the County Transportation Commission and the Mohave County Library Advisory Committee; and has graduated from the Colorado River Women’s Council Leadership Program.

The busy assistant was also appointed to the Fire Board due to a resignation. She says enjoyed her time on the board and says she prided herself because “the whole time I worked there, I never voted for a tax increase.

“I have to live within my means, and they should too,” she said.

In November 2021, Flenniken resigned from the Fire Board because she had moved out of the district to Golden Valley.

Flenniken says “I’ve had many jobs, but I have finally found that the rest of my life career will be working for an elected official. I enjoy solving problems and helping constituents is my number one priority.”

Meanwhile, she loves living in Golden Valley with her daughter, Kristi and her husband, Daniel. She points out, “we bought 2.35 acres for the three of us to live on and we absolutely love it.” She is also the mother of a son, Shon, and also loves Shon’s wife and her daughter-in-law, Emily. Flenniken has four grandchildren, and a grand dog named Venus is definitely a part of the extended family.

Flenniken is genuinely proud of her county job with Supervisor Angius, which she calls extremely “rewarding.” She says it gives her a daily opportunity “helping constituents in finding solutions to their problems.”

Regardless, her endgame is in sight, and she looks “forward to retiring in this beautiful county by December, 2028.” But, in the meantime, she has plenty of work ahead that she loves for the next six years.