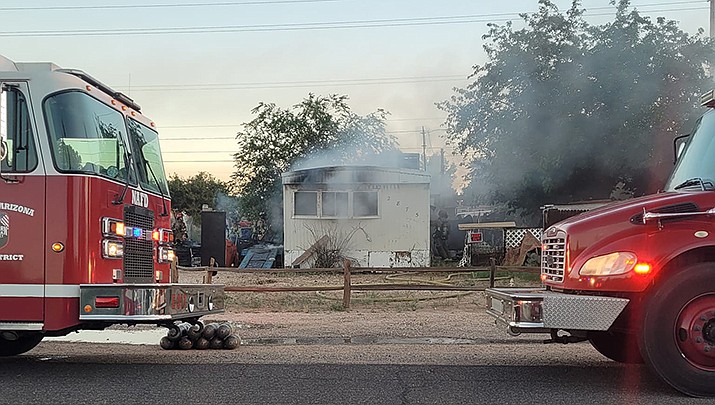 A fire destroyed this home and killed a dog on John L. Avenue near Kingman on Monday. (Photo by Northern Arizona Fire District)

KINGMAN – Northern Arizona Fire District and Kingman Fire Department responded to a residential fire. The house was a total loss.

While no injuries were reported, a dog was died in the fire, according to an NAFD press release.

Firefighters arrived at a home in the 2800 block of John L. Avenue in Kingman on 6:15 a.m. Monday to find a manufactured home on fire.

One resident was trapped in the backyard and could not exit due to the extent of the fire.

The news release said an individual was helped over a chain-link fence, but a dog died in the blaze.

A neighboring house was also threatened but the fire was quickly stopped by firefighters on scene. The home was a total loss and multiple residents are left displaced.

The American Red Cross was also requested and will be assisting the displaced residents.

The cause of the fire is undetermined at this time.