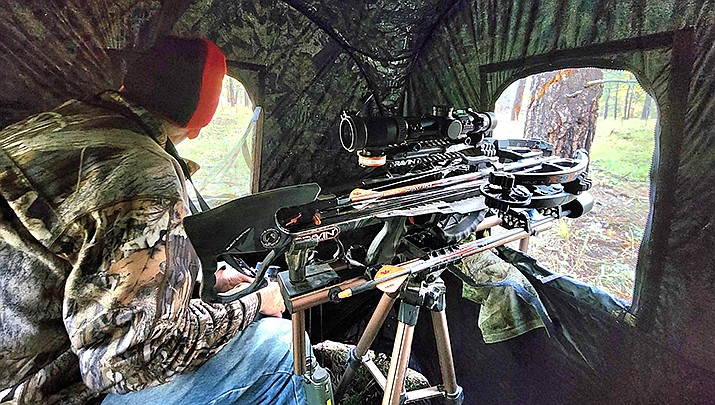 The 2022 archery elk hunts will be over tomorrow, and for most hunters this year, the above-average monsoon rains in the north this summer have really affected the outcome of many Arizona elk hunts.

Right now, in just about all of the units where elk are hunted in northern Arizona, the dirt water tanks have refilled, and there is lush green grass and shrubbery every place you look.

I recently spent almost a week in Unit 7W and in Unit 8, helping some friends, and it was obvious that the abundance of water and feed had changed the way that hunters needed to hunt elk this year.

I went out with my friend Jessica who is a disabled vet, on the second day of her bull elk hunt in 7W. This was her first archery bull elk hunt. Jessica had received the tag from Eddy Corona at the Outdoors Experience Four All (OEAA) organization. Jessica had no 4x4 vehicle, and the unit had been pounded by torrential rains. I couldn’t stay long, but I wanted to show her some of the places we had been successful in the past.

The elk, we found were scattered, and the bulls were not making any noise. I took Jessica to several of the dirt tanks we had hunted with success in the past that were full of water, but elk tracks were few and far between. With water in every low spot, ditch and even in the road, there was no reason for the elk to go to any permanent water.

It was obvious that it was going to be a spot and stalk hunt. The bulls weren’t ”calling,” so glassing for feeding elk was about the only technique she could try.

As it turned out, Jessica had to leave after just four days in the field. It rained almost every day, the elk weren’t “talking,” and not having a 4x4 really made things tough.

I went back to Unit 8 to help my friend and fellow Hunter Education educator John Schmidt, who is battling a rare form of cancer. John is 75 years-old and had drawn an archery antlerless elk tag. A relative was supposed to go on the hunt with him, but backed out. I decided to go and give Schmidt a hand.

John was only able to sit in a blind, as his ability to hike long distances had been compromised.

We didn’t see many elk in the time I was there. I never heard a bugle, and despite the fact there were 250 bull tags and 50 antlerless tags issued for this hunt, we never saw one elk that was taken by hunters in the many camps we drove by.

I felt bad for John, as he really enjoys hunting, but this time Mother Nature had won the “game.”

And it wasn’t just in Unit 8 or 7W that the elk were scattered and hunt success had obviously been affected by the rains,

Archery hunters in Units 6A, 9 and 10 reported on social media that they were not having much luck in those units, too.

Archery bull elk hunters in Unit 8 typically enjoy success of just under 30%. Antlerless hunters have had success ranging from 20 to 22% the past few years.

I can’t wait to see the results of this year for the archery hunters in Unit 8. I suspect there will be a big drop in the hunt success.

For most archers, 2022 will go down as a very tough year.