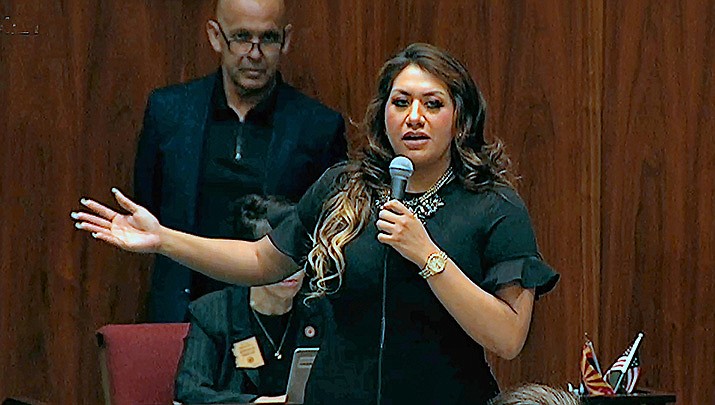 State Rep. Alma Hernandez (D-Tucson) has leveled allegations that a male lawmaker made disparaging comments about her. Top House Democrats are calling for an investigation. (Photo by Howard Fischer/For the Miner)

PHOENIX – Top House Democrats want an investigation into allegations that a male lawmaker made disparaging comments about a female colleague.

“The House of Representatives has a clear policy on workplace harassment that gives zero tolerance to this type of behavior,” Bolding said. “Pursuant to this policy, these allegations will be taken seriously (and) properly investigated.”

In an open letter Friday, Hernandez said Fernandez referred to her multiple times in insulting terms about her weight and told other lawmakers and lobbyists attending a rural transportation conference this week in Yuma that he “hates me.” Hernandez, who was not at the conference, said she learned of his comments from other legislators who were there.

“What is most embarrassing is he did this with Republican members thinking they would engage,” she said.

Fernandez, for his part, said what Hernandez is alleging never happened.

“I did not make the statement being wrongly attributed to me, and I don't condone it,” he said in a statement to Capitol Media Services. And Fernandez took a verbal swat at Hernandez for seeking an investigation based on what she said others at the conference told her.

“If there is a lesson to be learned here, it's that one should always be skeptical of secondhand gossip and that kindness is always the better choice,” he said.

Hernandez said the veracity of her claim can be verified by other lawmakers who attended the conference. But she provided no names of anyone who would speak on the record now, before they are interviewed by House investigators.

She did not file a complaint with the House Ethics Committee. That would have triggered a formal process, complete with public hearings and the ability for both her and Fernandez to present evidence and witnesses, something she said is not necessary.

“Democratic leadership is already doing so,” she said.

Less clear is what Hernandez wants to happen.

“While an apology is a start, it is far from what Brian owes to every single woman in this caucus and in this party,” she wrote.

“What's more, our party leadership must seek a punishment,” Hernandez said. But she did not say what form that would take and declined to provide specifics to Capitol Media Services.

At one point in her letter she mentioned the possibility of censure. And, at the very least, she said, Fernandez should “take a sensitivity training.”

Hernandez will be returning to the House in January. There were only two candidates in her district, both Democrats, for the two House seats.

Fernandez was named to the House last year by the Yuma County Board of Supervisors to fill out the two-year term of his mother, Charlene. She resigned to take a job in the Biden administration.

He ran unopposed in the August primary for the state Senate. But he will face off in November against Republican Gary Garcia Snyder.

Hernandez mentioned Charlene Fernandez in her letter, praising her as someone who “has fought these battles, as a woman, as a person of color, and as someone who grew up fighting for every opportunity.”

“I can promise you that he would never use this language on his mother or sister,” she continued. The result would be far worse than censure.'