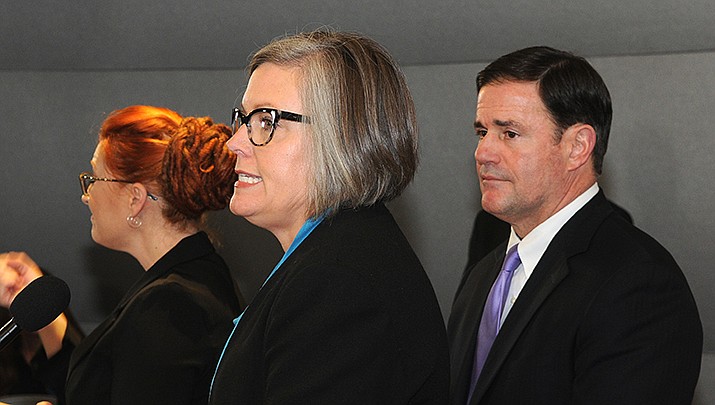 Arizona Sec. of State and Democratic gubernatorial candidate Katie Hobbs has told a federal judge that two new Arizona voting laws enacted by the Legislature could interfere with the rights of some people to register and vote. (File photo by Howard Fischer/For the Miner)

PHOENIX – The state's chief election officer is telling a federal judge there is merit to claims that two new laws could interfere with the rights of some people to register and vote.

In new court filings, Secretary of State Katie Hobbs said she is not taking an official position in the lawsuit filed against her and Attorney General Mark Brnovich by the Arizona Asian American Native Hawaiian and Pacific Islander for Equity Coalition.

But Hobbs told U.S. District Court Judge Susan Bolton there are definite harms that can occur if she allows the laws to take effect as scheduled on Saturday.

And, at the very least, she said the two statutes are unnecessary.

"There is no evidence of widespread voter fraud in Arizona that threatens election integrity or impacts election results,'' Hobbs said in the court filing. And she said the challenged provisions in the law "do not advance any legitimate regulatory interest in ensuring free, fair, and secure elections, furthering the orderly and efficient administration of elections, or preventing fraud in elections.''

But her admissions in the legal documents comes even as Brnovich is asking Bolton to dismiss the entire lawsuit.

He is telling the judge that only election regulations that impose a severe burden are subject to "strict scrutiny'' by federal courts.

These laws, Brnovich argued, do not, meaning they must be upheld if they serve a legitimate purpose. And he said that's clearly the case here.

"The dignity and very concept of citizenship are diluted if noncitizens are allowed to vote,'' Brnovich said. And he argued that the information the new laws demand "facilitates ascertaining if a registrant is a U.S. citizen.''

At the heart of the lawsuit are two measures approved earlier this year by the Republican controlled legislature.

HB 2492 is designed to require proof of citizenship from anyone who registers to vote. That is largely aimed at the approximately 12,000 people who registered using a special federal form.

Unlike the state form, it does not require citizenship proof. But those who use the form are entitled to vote only for federal candidates like president and members of Congress.

Under HB 2492, however, presidential votes would not be counted.

It isn't just the coalition challenging the law. At least five other lawsuits have been filed, including one by the Department of Justice which contends Arizona has no legal right to demand proof of citizenship from those who use a federal voter registration form to vote in federal elections. Assistant Attorney General Kristen Clarke, who heads the agency's civil rights division, said that runs afoul of the National Voter Registration Act which permits those who use the federal form, which has no proof-of-citizenship requirement, to cast ballots for those running for federal office, including president and members of Congress.

Hobbs said that, as chief elections officer, she agrees that the citizenship proof requirement conflicts with the federal law.

But what's also concerning, Hobbs said, is the measure requires county recorders to cancel registrations when they receive and confirm information the person is not a citizen.

"HB 2492 does not specify what 'information' establishes a voter 'is not a United States citizen' currently,'' the Hobbs filing reads. "HB 2492 may subject individuals to investigation and prosecution based on certain citizenship information derived from potentially outdated and unreliable sources.''

And she told Bolton that HB 2492 does not provide notice to a voter before his or her right to vote for president is canceled.

Similar problems exist, she said, with HB 2243, the other challenged law.

That measure requires county recorders to cancel someone's registration after obtaining information and confirming the person is not a citizen. And if the person does not respond within 35 days, his or her name is forwarded to prosecutors.

The problem, said Hobbs in her new filing, is that the legislation will subject voters to investigation by the attorney general "based on potentially unreliable and outdated U.S. citizenship data.''

She also is telling the judge there's no legitimate reason for some of the new requirements.

One spells out that people registering must to provide a place of birth.

Brnovich said that, along with proof of citizenship and proof of residency, "helps election officials verify the eligibility of would-be voters.'' Hobbs disagreed.

"A voter's place of birth is immaterial to a voter's qualifications to register and vote,'' she said.