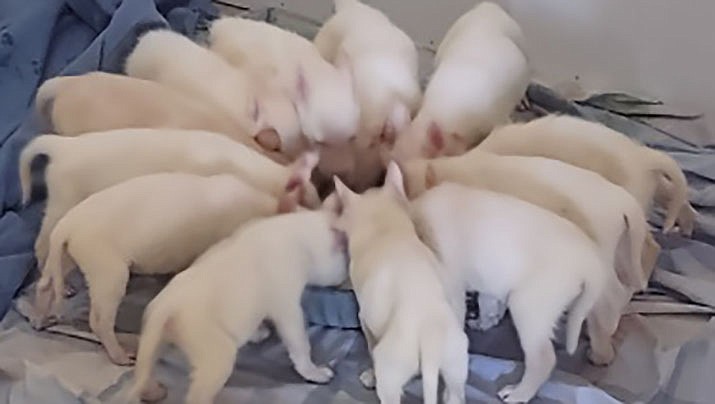 Someone recently left these 12 puppies in a bag outside the Help Animals Live Today no-kill shelter in Kingman. (Courtesy photos by Penny Townsend)

KINGMAN – Every sector of animal care is experiencing overload and frustration due an increase in abandoned animals, including the non-profit Help Animals Live Today in Kingman.

Penny Townsend of HALT, located at 6625 N. Massachusetts Dr. in Kingman, shared a story about coming to work recently and finding a tote bag stuffed with 12 puppies.

Just days before HALT had posted on Facebook explaining they were unable to take more animals. Townsend said it was lucky she found them in time because they were overheating on a hot summer day.

“We're just trying to carry on the work that founder Lottie (Benker) started for as long as we can and we'll keep doing it until we can't do it anymore,” Townsend said.

Animals of all ages are being surrendered to the no-kill non-profit, and Townsend said money is tight when animals need to be fed, have medical operations and live comfortably in the temporary environment. Recent medical bills have cost HALT up to $10,000.

The increase has caused them to ask the public not to bring in animals due to space, and adoption can be slow. Since it’s a no-kill facility, some animals are there for years or their entire life if they aren’t adopted.

“There is an unusually extreme amount of dogs that have been returned, dogs being surrendered,” Townsend said.

Townsend said people surrender their dogs for a variety of reasons. Some elderly owners become too sick to care for their pets, or puppies require too much attention for people to handle. Regardless of the reason, animals across the county are being abandoned and stuck in an overcrowded system.

“The reasons that are quite often given by the people, which I don't find valid reasons, are ‘I'm moving, I can't take my dog; I'm having a baby; I don't want my dog anymore,’” Townsend said.

Townsend said HALT asks people to spay/neuter their animals to avoid the unnecessary stray animal population growth throughout the county, particularly cats. She also said to be wary of free cats and kittens since they may not be up-to-date on their medical care.

“People are giving away cats for free and they're not fixed, they're not vaccinated,” Townsend said. “They're going to pick a free cat, especially in this financial climate.”

Recent Kingman Miner interviews with representatives of the non-profit Feral Cat Warriors and the Mohave County Animal Shelter shared similar situations including overcrowding and medical expenses. Local organizations are in a crisis mode to get pets into permanent households and to encourage spaying/neutering pets.

The no-kill non-profit facility is bearing the brunt of the uptick in animals. While many workers of HALT are volunteers, they have to pay to keep their facility up-to-date and suitable for all animals.

Townsend said while the sanctuary can hold 70 pets, the kennels are in desperate need of maintenance and some are too worn out to hold animals.

There are currently around 30 animals and HALT is telling people they’re full due to the lack of suitable kennels. Due to the health status of the cats and dogs, some animals have to be isolated.

“And of course, you’ve gotta remember we have one kennel building that we can really use to isolate,” Townsend said. “Even that's not optimal, but we do our best.”

Finding volunteers can also be a challenge due to the distance it takes to get to the facility and time. However, they will take any help they can get, even if it's just to walk dogs. Most importantly, animals need homes.

“We want the dogs to be happy in their home and the people to be happy with them,” Townsend said.

For more information about HALT or to donate visit https://www.haltaz.org/.