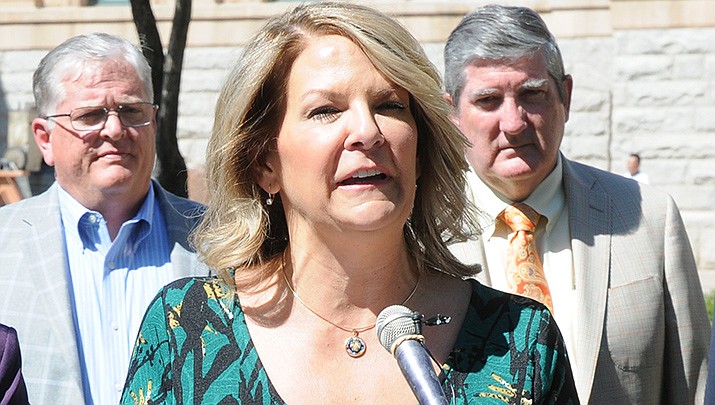 A U.S. District Court judge has ruled that the U.S. House committee investigating the Jan. 6, 2021 riot at the U.S. Capitol, is entitled to the phone records of Kelli Ward, the head of the Arizona Republican Party. (File photo by Howard Fischer/For the Miner)

PHOENIX – The House committee investigating the events around the Jan. 6 riot is entitled to get the phone records of the head of the Arizona Republican Party.

U.S. District Court Judge Diane Humetewa rejected the arguments by Kelli Ward that the subpoena lacks a valid legislative purpose. She said it is clear that the House, in setting up the panel, empowered it to look into not only the events of that day but also make recommendations for changes in laws, policies and procedures as the committee "may deem necessary.''

And Humetewa said that courts generally defer to the decisions of lawmakers about the scope of their investigations.

The judge was no more impressed by Ward's arguments that the subpoena will endanger not only her rights but those of the entire Arizona Republican Party.

It seeks the phone numbers of those she called or texted, or who called or texted her, as well as those of her husband, Michael. He, like his wife, were part of a slate of fake electors submitted to Congress saying, incorrectly, that Donald Trump had won the state's 11 electors.

"If the subpoena is not quashed, members of the AZGOP will be made to feel that every time they communicate with party leadership, they risk those communications disclosed to law enforcement followed by a knock on the door (or worse) from federal investigators,'' argued Alexander Kolodin, her attorney. "A stronger risk of associational chilling can scarcely be imagined.''

Kolodin also argued that because the House panel is controlled by Democrats that it would use the information in the phone records "to harass or persecute political rivals by inquiring into their dealings with the party chair.''

And he even claimed that giving the list of Ward's phone contacts might induce people to quit the Arizona GOP "and dissuade others from joining it because of fear of exposure of their beliefs through their associations and the consequences of this exposure.''

"Plaintiffs have provided no evidence to support their contention that producing the phone numbers associated with this account will chill the rights of plaintiffs or the Arizona GOP,'' the judge wrote. She said that, at best, the claims "constitute a subjective fear of future reprisal,'' something that federal appellate judges have said is insufficient to show any infringements on associational rights.

And, if nothing else, Humetewa said she has to presume the committee "will exercise its powers responsibly and with due regard for the plaintiffs' rights.''

The judge also said she was not buying arguments that the records from any phones that Ward and her husband were using – both are doctors – would violate the rights of their patients who used those numbers to contact them on those lines. She said the House panel was not seeking confidential contents of any patient's medical records.

And she called it irrelevant that the subpoena might unearth the names of patients.

"The court finds it implausible that a patient's phone number would inevitably expose information about a patient's medical history, condition, or treatment, an potentially reveal information the patient had divulged in confidence,'' she wrote.

Ward already has filed paperwork asking the Ninth Circuit Court of Appeals to overturn the ruling.

In refusing to quash the subpoena, Humetewa agreed with arguments by Douglas Letter, the general counsel for the U.S. House of Representatives.

He told the judge in his own legal filing that the committee wants only call data, things like the numbers of calls and texts sent and received, not actual content.

"The Select Committee is not seeking sensitive donor information,'' he said.

But the real key, Letter said, is that this is not some wide-ranging request. He pointed out what the committee wants covers only from Nov. 1, 2020, just prior to Election Day, through Jan. 31, 2021.

"That date range was specifically designed to obtain information referring are relating to activities surrounding the 2020 presidential election, including false assertions that the election had been stolen and actions related to the appointment of an alternative slate of electors from Arizona,'' he said. And Letter told Humetewa those are "activities that directly concerned the Jan. 6 attack.''

It is Ward's role in all of that the committee seeks to discover.

Central to the legal fight, Letter said, is the legitimate power and role of the committee in finding out the causes of the attack. And he said the committee does not view the her actions in Arizona and the riot as unrelated.

"Dr. Kelli Ward participated in multiple aspects of these attempts to interfere with the electoral count in Jan. 6,'' he said. "She told officials in Maricopa County to stop counting ballots and promoted inaccurate allegations of election interference by Dominion Voting Systems.''

In sending the set of unauthorized set of electoral votes to Congress, Letter said Wake "mischaracterized (them) as representing the legal votes of Arizona.''

And that's not all.

"While Congress was recessed due to the mob's violence and attack on the Capitol, Dr. Ward continued to advocate for overturning the results of the election,'' Letter said, citing a Jan. 6 Twitter post. And even after the riot and congressional certification of Biden's win, he said, Ward continued to maintain that the slate of fake electors contained "the rightful and true presidential electors for 2020.''