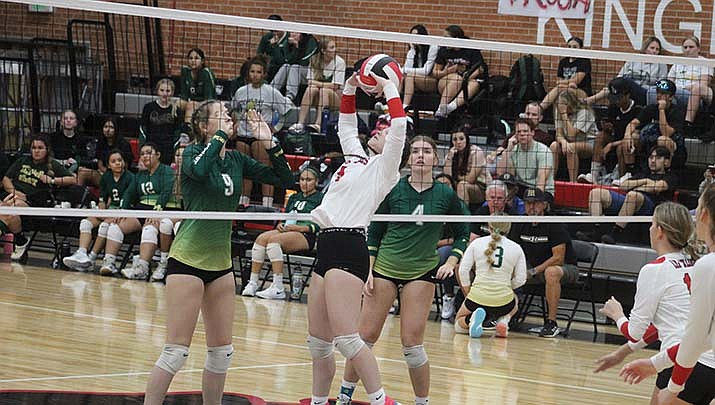 Jade Russell of Lee Williams sets up a teammate in the Lady Volunteers 3-0 win over Mohave in a matinee game played Friday at Lee Williams. The Vols won by set scores of 29-27, 25-10, 25-15 and improved to 4-3 for the season. (Kingman Miner photo)

KINGMAN – The Lee Williams High School volleyball team won 3-1 on Monday, Sept. 19 against Mingus Union in a game that was closer than the final score appears.

The Lady Volunteers reached the .500 mark with the win, improving to 3-3. Mingus Union slipped to 3-5.

KINGMAN – The Lee Williams High School volleyball team notched an easy 3-0 win over the visiting Mohave Thunderbirds in a matinee game at the Volunteers’ home court on Sept. 23.

KINGMAN – The Kingman Academy of Learning volleyball team kept its undefeated season alive with a 3-0 win over NFL YET College Preparatory on Thursday, Sept. 22.

The Lady Tigers improved to 8-0 on the season. The Eagles fell to 0-6.

TONOPAH – The Kingman High School volleyball team lost a seventh-consecitive game, falling 3-0 to Tonapah Valley on the road on Thursday,