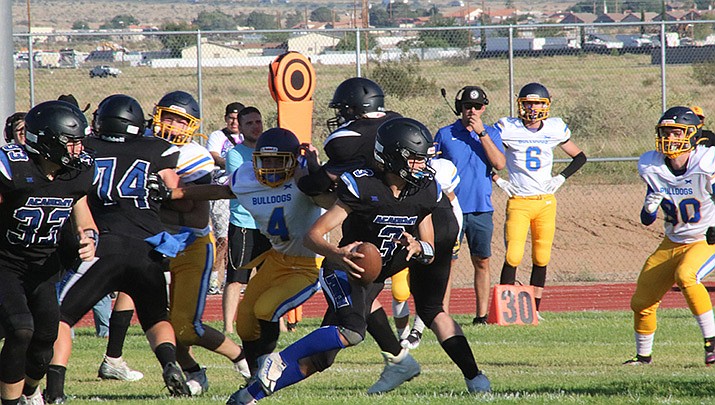 KINGMAN – It was a long ride home to Phoenix for the Cortez High School football team, after suffering a 20-14 loss to Kingman Academy in a high school football game played Saturday afternoon, Sept. 24, at Kingman High School.

It was the third straight win for Academy, now 3-2 under first-year coach Sean Windecker. Cortez is 4-2.

Junior quarterback Casen Short completed 9-of-12 passes for 228 yards and two touchdowns, and senior running back William Robinson gained 125 yards on 15 carries and scored a touchdown for the Tigers. Junior Mason Anderson had three catches for 107 yards, including an 82-yard touchdown reception. Senior Jacob Parrott caught two balls, including one for a score, and gained 82 yards.

Kingman Academy leads the Class 2A Hassayampa Conference with a 3-1 mark in conference play. The Tigers are ranked 21st in the state in Class 2A.

On defense, Anderson was listed for six of the Tigers’ nine sacks, which netted 48 yards in losses.