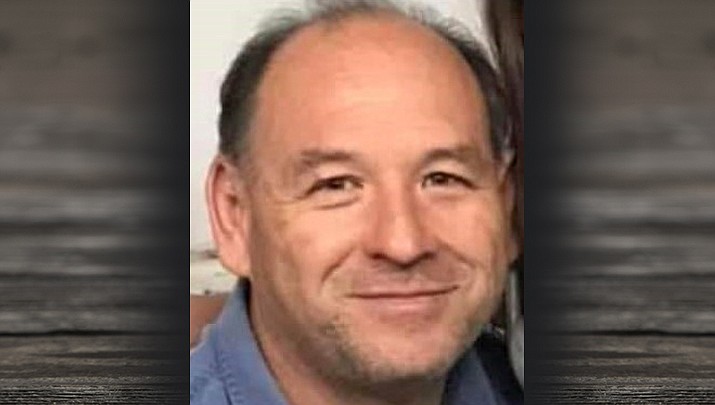 Victor Damon Martell passed away on Dec. 18, 2022 of a sudden heart attack at his home in Kingman, Arizona.

Victor was born July 24, 1964 in Fairbanks, Alaska. His family moved to Kingman in 1968 where he spent the remainder of his childhood. Victor attended Kingman High School and participated on the wrestling and track teams. He was an incredible athlete. In 1982 and 1983,

Victor won the Heavyweight State Wrestling Championship under the coaching and guidance of Roger Miller. In 1983, after being coached by John Beale, who held the shot-put record since 1964, Victor threw the farthest in state shot-put and broke that record by a few inches. Victor was the “Gentle Giant”. He was a formidable figure who competed like a warrior on the field and mat. This led to a reputation of intimidation. However, one interaction with Victor melted away all of that! He was a modest, humble man who exuded friendliness.

In 1994, Victor started coaching wrestlers at Kingman High School where he coached on and off until 2012. He also worked as a very skilled cabinet maker for many years.

Victor was a dedicated member of the Church of Jesus Christ of Latter-day Saints and served as a full time missionary in West Germany from 1983 to 1985. He loved people and helping others, even volunteering at Special Olympics one year.

He had a powerful hug and a ready laugh. Victor loved to go all out and celebrate every holiday. He would seek out families that were in need, with his brother Marc, to give special Christmas presents to each year.

Victor was preceded in death by his parents Gary and Barbara Keen Martell. He is survived by his three brothers, Lance and (wife) Carla of Surprise, Arizona, Marc Martell of Kingman, Arizona, and Norman and (wife) Margaret of Great Falls, Montana, along with many nieces and nephews.

Memorial services for Victor will be held at the Church of Jesus Christ of Latter-day Saints, 3180 Rutherford Drive, Kingman, Arizona, 86401 on Jan. 14, 2023 at 11 a.m. All who wish to attend are invited.” In lieu of flowers, please make a tribute donation to your favorite charity in Victor’s honor.

Some memories of Victor from classmates:

“I remember Victor being a terrifying presence in the hallways for those who didn't know him. Many were afraid to approach him. He was so big and quiet. I swear his Letterman's jacket made sounds like a walking gunfighter’s spurs before a shootout because of all the medals swinging on it.. I didn't know him well, but he was always nice to me. I initially thought it was because of my uncle, but it was just the way he was. I'm sad to hear the news.”

“I had the honor of knowing Martell and other early ‘80's excellent wrestlers. I heard stories of Gabe Sena from my teammates. Gabe's greatness was shared with Victor. He knew his wrestling skills would be honed to be great as well. I learned a lot from them old school wrestlers. First lesson, don't go in the practice room all cocky. We had wrestle-offs each week before each competition. I watched Martell a lot. Learned that to be better was not strength. It was quickness and balance. I learned lots from those varsity guys from Victor's era. It was hardcore during practice. Just one time, I got matched up for a few minutes with Martell during practice. Scared as shit as he smiled and laughed. He flopped me over like a baby gazelle.”

“This is extremely sad news. I had a couple of classes with Victor and my memories of him were that although he was a phenomenal wrestler and known for that above all he was equally a real brilliant and kind person -- 100% gentleman.”

“Victor was a very intelligent soft-spoken guy for being such a menacing looking guy. He will be missed.”