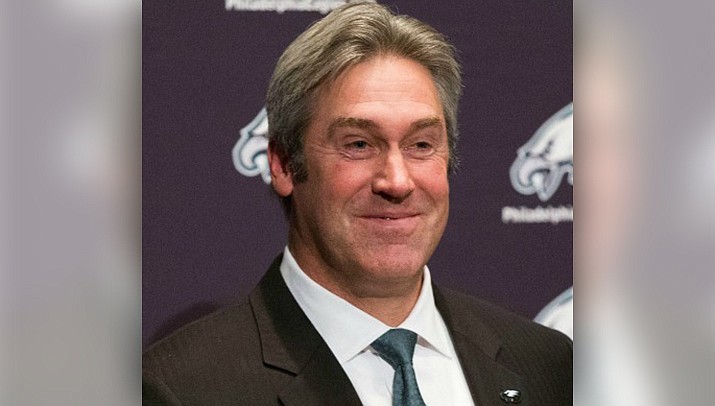 Doug Pederson, first-year head coach of the Jacksonville Jaguars, led his team to a worst-to-first effort in the NFC South Division this season. Pederson is one of five first-year coaches in the NFL to take their team to the playoffs this season. (Photo by Teed Johnson, cc-by-sa-1.0, https://bit.ly/3iySxdB)

Coaching changes paid off in a big way for several teams this season.

From impressive turnarounds for Jacksonville and the New York Giants to big boosts for Minnesota and Miami, a record-setting five of the 10 teams that hired new coaches for the 2022 season made the playoffs.

Doug Pederson led the Jaguars on a worst-to-first flip in the AFC South, Brian Daboll helped the Giants go from last place to a wild-card berth, Kevin O'Connell took Minnesota from a losing record to 13 wins and an NFC North title, Mike McDaniel got Miami to its first playoff berth since 2016 and Todd Bowles helped Tampa Bay repeat as division champs for the first time in franchise history.

That broke the previous record of four coaches getting to the postseason in their first season with a team set in 1997 when Jim Fassel (Giants), Pete Carroll (Patriots), Bobby Ross (Lions) and Steve Mariucci (49ers) did it.

There were a record-tying 10 coaching changes last offseason and not all of the newcomers had success with Denver firing Nathaniel Hackett last month and Houston firing Lovie Smith on Sunday night.

Chicago's Matt Eberflus finished with the worst record in the NFL, Josh McDaniels turned a 10-win playoff team in Las Vegas into a 6-11 team, and the Saints had double-digit losses for the first time since 2005 in their first year under Dennis Allen.

The most impressive turnaround came in Jacksonville where Pederson helped the Jaguars become the first team since the 2008 Dolphins to win their division the season after posting the league's worst record.

Daboll's work helping the Giants go from 4-13 to 9-7-1 despite a flawed roster hurt by a staggering $54.8 million in dead money on the salary cap to get to the postseason for the first time since 2016.

Bowles struggled a bit more as Tampa Bay won just eight games to become the fourth division winner in NFL history with a losing record. Two of the previous three — the 2010 Seahawks (7-9) and 2014 Panthers (7-8-10) — won a playoff game, while Washington (7-9) lost to the Bucs in the 2020 playoffs.

The Texans are once again looking for a new coach after the rare, back-to-back seasons of one-year coaching tenures. Houston fired David Culley after his first season in 2021 and Smith this season.

The only other team since the merger to do that was the 49ers, who had three coaches in a row last a year or less from 1976-78 with Monte Clark, Ken Meyer, Pete McCulley, and did it again in 2015-16 with Jim Tomsula and Chip Kelly.

All six games on wild-card weekend are rematches from the regular season, including three matchups of division foes with Baltimore playing Cincinnati, Miami visiting Buffalo and San Francisco hosting Seattle.

Two of those three matchups ended in splits in the regular season with the Ravens and Bengals, and Dolphins and Bills splitting their two games.

The 49ers swept the Seahawks but know how little that matters after losing to the Rams in the NFC title game last season following two regular-seasons wins.

In the Super Bowl era, teams that swept an opponent in the regular season are 14-10 in a playoff rematch, including 13-6 when the game is at home like it is for the 49ers on Saturday,

In the other rematches, the Chargers are seeking to avenge a Week 3 loss to Jacksonville, the Giants are looking to do the same after losing to the Vikings in Week 16, and the Cowboys are trying to do it after losing in Week 1 to Tampa Bay.

This is the fifth time since the merger that every game in the opening round of the playoffs is a rematch from the regular season, according to the Elias Sports Bureau. It happened on four-game wild-card weekends in 2009, 2004, 1994 and 1992.

The Niners are headed into the postseason on a quite a roll, having won the last 10 games of the regular season with Jimmy Garoppolo starting the first five games and Brock Purdy the last five.

The last team to have two QBs with consecutive five-game winning streaks were the perfect Dolphins in 1972 with Bob Griese and Earl Morrall.

San Francisco is the 13th team in the Super Bowl era to end the regular season on a winning streak of at least 10 games.

The results of the previous 12 haven't been overly impressive with only three winning the Super Bowl with the 1972 Dolphins, 1976 Raiders and 2003 Patriots extending the streaks through the postseason.

Two others got to the Super Bowl before losing with the 1967 Raiders and 2007 Patriots falling in the final game.

Hines became the first Bills player to return the opening kick for a TD since Terrence McGee did it against Miami and added another later in the game to become the first player with two kick return TDs in a game since Leon Washington did it for Seattle in 2010.

The returns gave the NFL nine combined punt and kick return TDs — the second fewest in the Super Bowl era to the seven in the nine-game, strike-shortened 1982 season.