A bass bonanza at Lake Picachos in Mexico 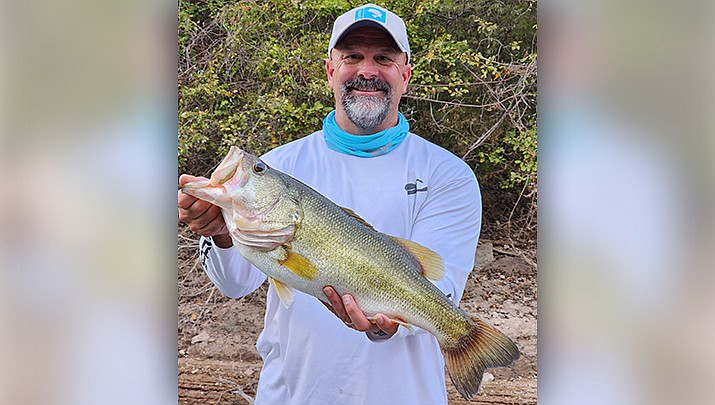 If you are a serious bass fisherman, and want to go on a trip of a lifetime where you will catch and release more largemouth bass than you’ve ever caught before, I think you’ll want to read this story.

I recently returned from a trip that has almost become an annual event with my awesome friend Mike Hulsey to a lake in central Mexico.

The lake we fished for three days is called Lake Picachos, and it is located about 30 miles north of Mazatlan, Mexico.

This lake was created in 2009 when Picachos Dam was built on the Presidio River. The lake encompasses about 38 miles and is now considered one of the premier bass fishing lakes in Mexico.

This is the third year in a row that Mike and I have gone on this trip. It started when we flew to Mazatlan from Phoenix on Dec. 27, and then flew back to Phoenix on Dec. 31.

Some might ask: “Why go there is late December?” Well, the seasons are different down there and this time of the year it is nice.

Night time temperatures are cool, but daytime temps are in the 70s and at times even makes it to the 80s.

In a nutshell, it is a bass anglers paradise.

After we arrived in Mazatlan, we were picked up in a van and taken to the lake. It takes about an hour. Each angler is assessed a fee of $90 for transportation to and from the lake.

The accommodations at the lake are comfortable, but quaint.

Mike and I were assigned to a cabin that had three separate small bedrooms. Each bedroom had a bed, and a small table. It also had air conditioning, which you will definitely need.

After you check your baggage in your room, each angler goes outside and picks out the rods they are going to use. The camp has a variety of spinning and casting rods to pick from. Each angler is required to bring their own reels and their own tackle.

Each morning one of the staff will come to your room at exactly 5:10 a.m. with a pot of coffee and wake you up.

Breakfast is at 5:30 a.m. and you meet your designated guide at his boat at 6 a.m. Your guide will be different every day and they are assigned by the camp manager.

The food is awesome! Trust me when I tell you will probably gain a few pounds on the days you are there.

But while the scenery and food are awesome, it is the fishing that is unbelievable!

On Day 1 Mike and I caught and released 113 bass. Mike caught more fish than I did, but I expected that, given I opted to sit in the back of the boat for the entire trip.

Mike is an awesome guy, has a high stress job, and this trip lets him unwind, so I’m glad to be the back seat angler.

Mike and I caught bass on top water lures – mostly white Rio Ricos, but we also caught a lot with 8-inch magnum Zoom lizards, watermelon with red flake. We always dipped them in a chartreuse garlic flavored dye. It’s weird, but using the same lizard that wasn’t dyed, you wouldn’t get near as many bites.

Day 2 was overcast and the bass bite was crazy. By 10 a.m. Mike and I caught as many fish (113) as we had caught on our first day. Mike, using a shallow-running white squarebill crankbait, was literally getting a strike or reeling in a bass on every cast.

Then something happened I’ll never forget. Mike was fishing the bank in a large cove and I was casting out to trees that were in the middle of the cove.

I saw a splash, and then saw something floundering on top of the water. I asked our guide what it was and he said, “It is a carp!” I have never seen a carp on Lake Picachos before, and this fish looked big. There were several fish hawks in trees in that cove, so I figured I’d catch the fish and bring it in and throw it up on the bank for the birds to feed on.

I tossed my Rico out in front of the fish and reeled towards it. I actually hooked it near the mouth and started reeling it in. It was flopping and thrashing and when it was close to boat, I saw that it wasn’t a carp at all, but was the largest largemouth bass I had ever seen!

Our guide netted the giant fish and got it into the boat. We immediately saw that there was about half of a 12-inch channel catfish stuck in the throat of the bass. The bass was thrashing as the guide used his pliers to pull the catfish out of bass. He put the bass on the scales and it weighed 9.85 pounds. It was the largest bass I ever held.

After a few photos, the bass was returned to the water and released. But several minutes later we saw it floating on the surface. Our guide tried and tried to resuscitate the fish, and finally it dived once more out of sight.

We continued to fish in the cove, but a few minutes later the fish was seen swimming on the top, upside down. We motored over to the fish and the guide used a needle to deflate the air bladder. Again, he pushed it under.and off it swam.

But just at dark and before we left, the fish was spotted again on top, and still trying to swim.

It was obvious this bass was not going to live. I told our guide he should keep the fish to feed his family, rather than let some bird or animal eat it.

Turned out that bass, if caught on a hook and line, would have been the largest bass caught in Lake Picachos for 2022.

That night at dinner I told our fellow anglers the story and showed them the photos of the bass.

It had been a great day of fishing. In addition to all the big fish that we caught, we ended up catching 237 fish.

A memorable event occurred one morning when a fish hawk came down and grabbed my Rico lure that had got hung up on the shoreline in some rocks. Our guide was able to release the hawk without serious injury but it sure was an exciting 15 minutes as the aggravated and wet hawk screamed at us during and after it was released.

I should note that on a whim I had put 10 of my favorite Lake Mead bass lures in my tackle box. That is a 3½ inch tube bait that is called a 00B. Before I ran out of those baits, I caught 25 bass on those tubes in about three hours.

This was an amazing trip, one you should think about going on. This December there are 26 openings for anglers during that time. Ask your best fishing buddy to come along and I’ll guarantee you, too, will have a trip of a lifetime.