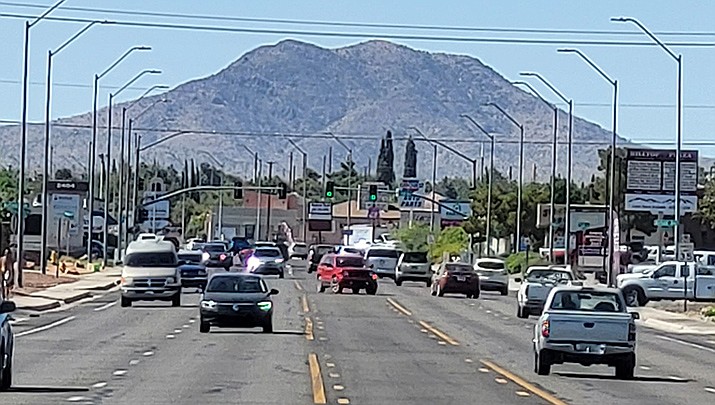 The recent spectacular eruptions of the Hawaii volcano are awe inspiring and show the awesome power of the Earth. It’s hard to imagine how hot the interior of the Earth is and how it can continue to erupt lava that is 1,000s of degrees hot. Watching the molten rock running down the mountain makes one feel powerless, as there is nothing that can stop it.

But why do some volcanoes have lava fountains where lava is erupted from the vent and flows like a river and others erupt in violent explosions that blast huge clouds of ash into the air?

Mohave County has experienced several types of volcanic eruptions in its geologic past. A violent type of eruption from the Silver Creek Caldera shot millions of tons of ash into the air depositing the extensive Peach Springs tuff, the tan colored rocks around Kingman. There were also less violent eruptions that formed the composite cone now called Three Sisters mountain, visible if you look due-south on Stockton Hill Road.

The Three Sisters eruption blew out cinders and lava flows that didn’t go far from the vent. On the road to Seligman, you’ll see a number of cone shaped mountains above the relatively flat terrain. These are cinder cones, built up from the eruption of cinders around a vent.

As you drive from Kingman to Las Vegas on Highway 93 and drop into the chasm of the Colorado River, there are flat topped mesas alongside the highway. These mesas are capped by old lava flows, similar to the ones being deposited in Hawaii today. Near milepost eight, one of the feeder vents that supplied the lava is visible in the roadcut on the east side of the highway. The molten rock hardened in the vent forming a purple-colored volcanic rock with large black volcanic glass nodules.

So why do some volcanoes blow their top sending millions of tons of ash into the air while others vent lava fountains that feed lava flows? The answer is in the composition of the magma, or molten rock.

Magma that comes from deep in the earth has the composition of basalt. It’s dark colored, and rich in magnesium and iron with silica in the range of 45% to 52% and low viscosity. Viscosity means how easily it flows – think of motor oil. Low viscosity oil like a 5W-20 flows fast while a high viscosity oil like 20W-50 flows slowly.

Magma that originates from areas in the Earth that aren’t as deep have the composition of granite. They are light colored with less magnesium and iron, silica in the rage of 60% to 80%, and high viscosity.

If a volcano is made up of magma that is basaltic in composition with low viscosity, it’ll erupt in lava fountains, flow on the surface and harden into basalt (there are other variations such as andesite and dacite but then it becomes complicated so let’s just stick with basalt). On the other hand, if the magma has the composition of granite with high viscosity, it’ll build pressure until the chamber can’t withstand the pressure and blows its top. The rock produced is mainly ash, tuff and other rocks made when the material that was blown into the air falls to the ground and hardens.

The best example of an active volcano with granitic composition magma is the Yellowstone Caldera. It has blown its top in the past and might blow its top in the future. In fact, it has blown its top several times as the continent moved over the hot spot that supplies the heat to the volcano. Calderas formed each time the volcano blew its top. The ancient calderas form a line from southern Idaho to Wyoming, getting younger from west to east.

Of course, the best examples of basaltic volcanoes are the Hawaiian island chain of volcanoes. Examples closer to us include the San Francisco peaks near Flagstaff, Bill Williams Mountain near Williams and the lava flows along the Colorado River. But the largest outpouring of basaltic magma happened in Washington state. The Columbia River basalts cover an area of 77,000 square miles with over 720,000 cubic miles of basalt having been erupted on the surface.

Thankfully, we have no active or dormant volcanoes in Mohave County. Our volcanoes are extinct, so Hollywood will not make a movie of a major volcanic catastrophe in Kingman caused by a volcanic eruption like the 1997 movie “Volcano.” This movie is about a volcano that forms along a fault under the City of Los Angeles. Now, as volcano experts, we’d want to know how deep in the earth did the magma come from, what is its composition and how viscous is it? With this information we’d know if we needed to worry about a major explosion that would kill everything within a 100-mile radius or would the lava just be shooting up in fountains and flow on the surface.