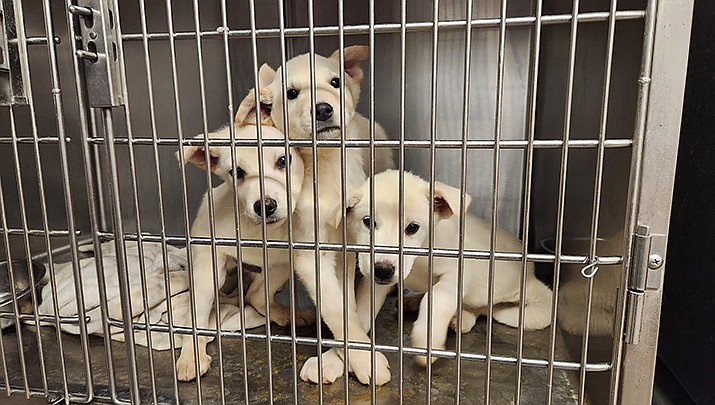 These puppies are among 43 dogs rescued from a residence in Dolan Springs on Jan. 11. The owner has been charged with animal cruelty. (Friends of Mohave County Animal Shelter photo)

DOLAN SPRINGS — Over 40 dogs were seized from a Dolan Springs residence, triggering an arrest.

According to a Mohave County Sheriff’s Office press release, the MCSO Animal Enforcement Division has been conducting an ongoing complaint of animal hoarding at two separate residences located in the Dolan Springs area. On Jan. 11, Betty Lynn Fuchsel, 77, was charged for 43 counts of felony animal cruelty, a class 5 felony.

Subsequent to her arrest, a search warrant was obtained for her properties.

According to law enforcement, some of these animals were running at large and attacking livestock in the area. The residences, located in the 15000 block of N. Garnet Drive and 16000 block of N. Kathleen Drive, were both being utilized by Fuchsel. Over the past several years, Fuchsel has received several citations in reference to the violations and failed to comply or appear in court. She was taken into custody for warrants that had been issued for her arrest for failing to appear on these charges along with the additional animal cruelty charges.

During the search of the properties, a total of 43 dogs were seized. Several were taken for immediate emergency veterinarian care. The animals were turned over to the Mohave County Animal Shelter.

The Mohave County Animal Shelter is in “desperate need” of dog igloos and houses, according to a Facebook post. They are also seeking monetary donation to help pay for supplies and medical needs for the 43 dogs.

“There is unity in numbers.ou might not think that your dollar matters, but it does,” the animal shelter wrote.

Donations can be made at friendsofmcas.org or in-person at 950 Buchanan St., Kingman. The dogs are not available for adoption yet and the investigation is ongoing.