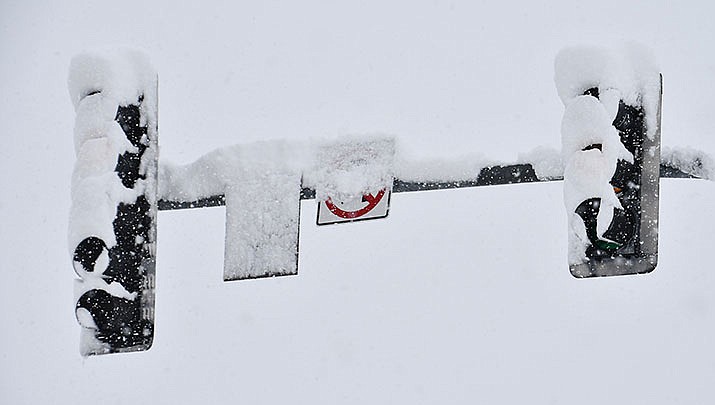 A storm brought as much as 20 inches of snow to parts of northern Arizona on Sunday, Jan. 15. (Miner file photo)

FLAGSTAFF, Ariz. - A winter storm dumped up to nearly 20 inches of snow in northern Arizona on Sunday with the Flagstaff area getting between 12 and 18 inches of snowfall, according to the National Weather Service.

With more snow expected Monday, Northern Arizona University announced it was canceling all classes Tuesday on the Flagstaff Mountain Campus due to the storm.

But school officials said classes held at other NAU locations, including online, will meet at their regular time and place.

Arizona Department of Transportation officials said multiple closures were in place Sunday for State Route 64 in the Grand Canyon area and northbound State Route 89 near Sedona through Kachina Village.

“We have 200 snowplows statewide that are working around the clock to get the roads clear,” said David Woodfill, an ADOT spokesman. “Before these storms, we’re always out ahead of time, prepping the roads with de-icing material.”

The National Weather Service predicted up to 11 inches of snow in Chama, although most of northern New Mexico will see far less.

Two inches of snow expected in Santa Fe and Taos by Sunday evening with more light snow possible through Monday and Tuesday.

The Phoenix metro area received about .03 of an inch of rain by mid-day Sunday, pushing the total for the month to the above-average mark of .57 inches.