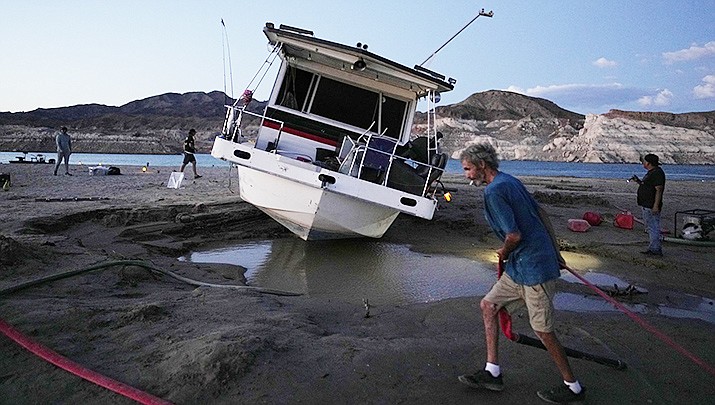 Craig Miller hauls a hose while trying to free his stranded houseboat at the Lake Mead National Recreation Area on Thursday, June 23, 2022, near Boulder City, Nev. Low water levels have made it difficult to launch and remove boats on the Lake, but a concessionaire at Temple Bar has constructed a new, usable launching ramp where boats can be launched for a fee. (AP Photo/John Locher)

I recently read in a news release from the Lake Mead National Recreational area about the opening of a launch ramp at Temple Bar.

I made a couple of phone calls to try and find out exactly what was going on and here is what I learned.

Temple Bar is located on the shrinking shores of Lake Mead. From information I found, a small floating building that sold bait and tackle was open there in 1951.

Since then, Temple Bar has become a destination used by watercraft owners from Arizona, California and Nevada.

However, the continued lowering of the lake ultimately caused the closing of Temple Bar. But now, there is a place where recreational boaters and anglers can launch their watercraft from Temple Bar.

According to the National Park Service, the concessionaire at Temple Bar, guest Services (928-767-3214) has opened a launch ramp that is open to the public for a fee.

I tried several times to contact guest services, but never got to speak to anyone about what is being offered.

The only information I’ve got is from the news release from the NPS and from Justin Pattison, deputy superintendent for the Lake Mead National Recreational Area.

In the most recent press release, the regular hours of the fuel dock are 8 a.m. until 5 p.m. The store is also open during those hours.

Under the agreement with NPS, the concessionaire is allowed to charge a fee for launching from this ramp. Pattison said he believes they can charge $20 for up to seven days if they want.

I can understand why the concessionaire at Temple Bar has invested a lot of money to keep a launch area available.

I know that many out there reading this will wonder why the NPS isn’t planning to put a launch ramp in at South Cove. I know from previous conversations with NPS officials that records indicated that more people utilize South Cove than Temple Bar. However, there isn’t any concessionaire nor services at South Cove.

Pattison stated: “I’ve had more bathymetry taken at SC (South Cove) than anywhere on (Lake) Mead to try and figure it out. If I thought something was viable in that immediate area I would have figured out something that worked.”

I’m glad to see that there is at least going to be one place for some Mohave County recreational users to go. The lake level is now at 1,045 feet in elevation and Pattison says the launch ramp at Temple Bar is expected to be useable until the lake drops to 1,015 feet before a major relocation would be needed.

But this ramp doesn’t do anything to help the community of Meadview. Without some kind of place for boaters to launch trailered watercraft, that community will continue to suffer from the lack of visitors.

One engineer I spoke to said that “anything is possible if you throw enough money at it.”

Maybe engineers outside of NPS could look at the bathymetry and see if they believe an area could be found in or near South Cove.

I believe other sources should be consulted. It’s not that I don’t believe what Pattison and the NPS are saying. But like former President Regan used to say: “Trust but verify!”