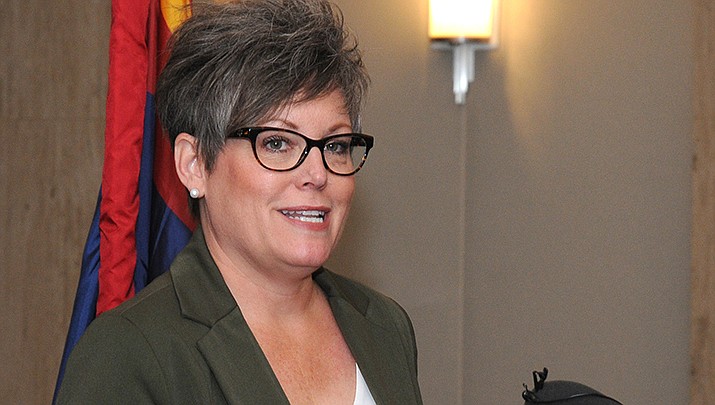 Arizona Gov. Katie Hobbs is asking the state Court of Appeals to toss out Kari Lake’s latest bid to overturn the 2022 election. (File photo by Howard Fischer/For the Miner)

PHOENIX – Gov. Katie Hobbs is asking the state Court of Appeals to toss out Kari Lake's latest bid to overturn the 2022 election saying it based on "mere speculation of election misconduct and conjecture regarding its supposed result."

In an extensive filing, Abha Khanna, the governor's lead lawyer, said that the Republican contender failed to offer any evidence at her trial last month that any vote was not counted. Khanna said even the ballots that on-site tabulators in Maricopa County could not read ultimately were tallied at a central location.

"Indeed, Lake's witnesses could not identify a single voter who was unable to vote because of tabulator issues,'' Khanna told the appellate judges. Instead, she said, Lake relied at a trial last month on the speculation of pollster Richard Baris about how many people might not have cast a ballot.

In a separate legal filing, attorneys for Maricopa County mounted their own attack on Lake's contention that problems with printers and long lines disenfranchised Election Day voters.

"One would expect that, if a full quarter of those who (ITALICS) would have (ROMAN) voted on Election Day had chosen not to do so -- a number Baris estimated to have been as much as 50,000 voters - Lake would have been able to produce someone at trial,'' the county's legal brief said. "That she produced none demonstrates the unreliability of Baris' estimate."

Lake is trying to get the appellate court to do what a trial judge would not last month: install her as the governor despite the fact the final tally showed her losing to Hobbs by more than 17,000 votes or, alternately, require there be a new election.

Much of Lake's argument to the appellate judge mirrors what she presented at trial, centered around problems that occurred at some of the county's 223 vote centers.

Unlike some counties, where people can vote only at their home precinct, vote centers allow anyone to cast a ballot at any location. That, in turn, requires the ability to print out a ballot on site unique to that person, with only those races on which he or she can vote.

Attorneys for the county said some of the ballots printed out were not dark enough to be read by tabulators.

Complicating matters, workers at some of the sites, seeking to resolve problems, adjusted the printers to a "fit to page'' setting.

That resulted in a 19-inch image being printed on the 20-inch paper. And that could not be read by the tabulators which were programmed to accept only the larger image.

But lawyers for the county said voters were given the choice of putting the unreadable ballots into a sealed box to be counted downtown or to go to another nearby polling place. So, they said, no one was denied the right to vote.

More significant, Khanna also told the appellate court that none of Lake's witnesses provided any evidence to back her charges that the problems with the printers and tabulators were the result of "intentional misconduct,'' citing the efforts of various technicians to fix the issue. And the attorney said the fact there may have been mistakes is not enough under Arizona law to set aside the results.

"Under Lake's preferred standard, elections would be routinely nullified where unforeseen and unintentional technical issues occurred in some places affecting some number of voters,'' Khanna said.

Attorneys for the county also urged the appellate judges to reject Lake's claim that "chain of custody'' requirements were broken.

The GOP contender alleged that this enabled up to 25,000 additional ballots to be added into the final batch. But the county's lawyers detailed for the appellate judges the procedures followed for early ballots that are mailed in, those placed into dedicated drop boxes, those dropped off at polling places on Election Day and those which are voted in person.

"Lake did not establish that the Maricopa County defendants engaged in any misconduct regarding chain of custody documentation, let alone misconduct that would alter the results of the 2022 gubernatorial election,'' they wrote.

Khanna also said there is no basis to believe Lake's claim that election workers were allowing many early ballots to be counted where the signatures on the envelopes did not match what was already on file at county offices.

She did not dispute the declarations of three people who were involved at the first level of the review process who claimed that they had flagged anywhere from 15% to 40% of the signatures, and that many of them ultimately were accepted. But Khanna said that's leaving out critical facts.

Khanna said these were "first-level reviewers'' who had access to only a limited number of signatures in a voter's registration record. And their task, she said, is to flag potential mismatches for higher-level review.

Those reviewers, Khanna said, not only had more experience than those doing the initial screening but also had access to other election documents in the voter's registration record. She said the fact that signatures that were flagged at the first level ultimately were accepted shows the multi-level system works "precisely as contemplated by Maricopa's Election Plan's multiphase signature verification process.''

The appellate judges are set to review Lake's arguments on Feb. 1.