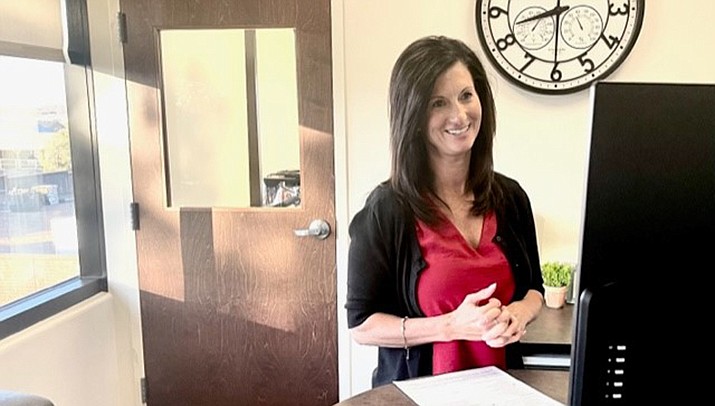 KINGMAN – Shelly Watson is the administrative supervisor for Mohave County’s Department of Development Services. She works under the wing of Director Tim Walsh and oversees administrative responsibilities for the department’s 60-plus employees.

She says: “We are ultimately responsible for the permitting and oversight of residential and commercial development in Mohave County.” It’s a vitally important job and a direct link to the growth of the county.

Born and raised in Greeley, Colorado, about 50 miles from Denver, Watson moved to Kingman in 1989. She had family in the area already, so settling into her new rural environment made it much easier for the transition. She says: “Kingman is such a great town” and it’s an area that has created “a great opportunity” for her and her family.

Watson has been in the administrative supervisor position for about 18 months. The trajectory of her county life shows how far individuals can go when they stick to it, work hard and do well. She has worked herself up to the leadership position in a forward and upward path through several positions with three different divisions within the county that first began back in 1997. It was the county’s health department where she first commenced and remained for over 21 years.

Watson was first hired as a temp for the health department, moving quickly to office assistant before being promoted within five years to senior secretary for the then Health Director, Patty Mead. In 2005, she was promoted to office supervisor for the Environmental Health Division.

Watson points out that working for the county is very much a family affair. After all, her husband Lyman (a former City of Kingman police officer) is a criminal investigator for the Mohave County Attorney’s office. The twosome will be celebrating 25 years of marriage in April. In addition, they have a son, Corbin, who lives in Kingman with his wife Britanie and their two young sons, Maverick and Lincoln.

Watson has thoroughly enjoyed her 25 years with Mohave County and the many challenges, experiences and education with each position she has held. She is “humbled and blessed” to have worked with “so many talented and knowledgeable people” during her career. She especially appreciates the opportunity to mentor and guide newer Mohave County employees, as many others did for her in the past.

Watson points out that the average county resident who gives her department a call or walks through its doors is “looking to build a new home.” They have only vacant land at hand and need government help to facilitate the next big steps. She says Development Services helps clear the way. Bigger projects involving businesses are also seeking the same and they all start with the planning and building departments. She and Walsh especially emphasize excellent customer service. “How can we make the difficult task better for the public?” She concludes: “A lot of people have a negative idea about government. We want to change that viewpoint.”

There is little question that he and her team are doing their best to make that happen.