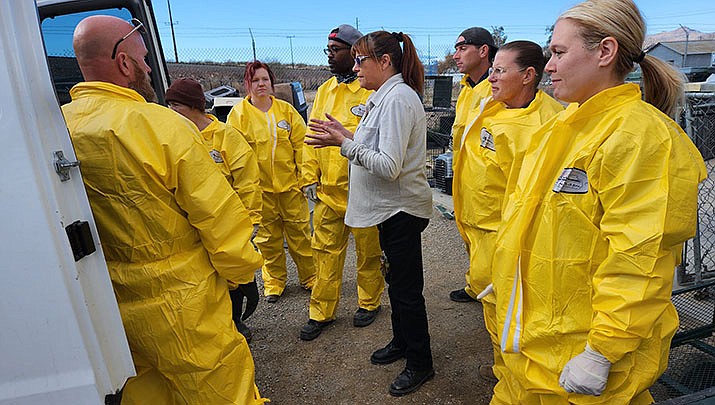 KINGMAN – In less than two weeks, the Mohave County Animal Shelter has acquired over 80 new dogs due to hoarding situations.

The incidents are currently under investigation, which means those animals cannot be adopted yet. MCAS Manager Nicole Mangiameli reported that the kennels have been at or over capacity for over a year, so the hoarding situations are putting a strain on resources. “We’ve gotten over 80 dogs in 10 days,” Mangiameli said. “It’s been a lot.”

“We’ve never had this many hoarding cases so close together,” Mangiameli said.

The shelter is seeking supplies, such as fleece blankets, towels, laundry detergent and canned food, to help with the large number of dogs. Monetary donations are also sought to cover medical expenses for animals of all ages.

Friends of Mohave County Animal Shelter President Lynn Kannianen said some of the puppies coming in have caught giardia, so staff is ensuring they get healthy as quickly as possible. While FOMCAS has funding for medicine and procedures the influx of dogs puts pressure on the budget.

Besides supplies, Kannianen said they are seeking volunteers to walk dogs and get them socialized. People can also sign up to help at adoption events.

Mangiameli stressed that the community can help by adopting one of the available dogs, specifically the larger dogs that have lived at the shelter for a long time. Currently, any dog over a year old and 40 pounds costs $25.

“The biggest thing the community can do is take a big dog home,” Mangiameli said.

The animal shelter is located at 950 Buchanan St. in Kingman. Donations can be made at https://www.friendsofmcas.org/.