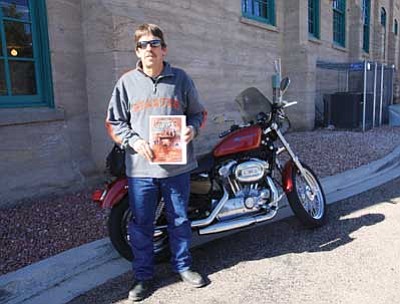 JC AMBERLYN/MinerKirk Slack of Out West Family Films stands by a motorcycle at the Kingman Powerhouse Thursday morning. His latest film is about the Mother Road.

A Chloride-based documentary filmmaker has completed his third such film, focusing on the past and future glory of Arizona's stretch of the Mother Road.Kirk Slack, who is also the co-founder of Out West Family Films, recently put the finishing touches on "Arizona's Route 66," a 34-minute video focusing on the history and resurgence of Arizona's section of the highway, which includes its longest single stretch.