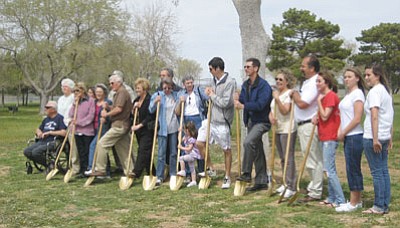 SUZANNE ADAMS/ MinerFamily, friends, and survivors gathered Monday in Firefighter Memorial Park to break ground on a new memorial, which will honor the lives of 11 firefighters and one civilian who were killed in the Doxol propane explosion on July 5,1973.

Friends, family, survivors and local officials gathered Monday morning to break ground on a new memorial in Firefighter Memorial Park, which will honor those killed in the Doxol propane tank explosion nearly 40 years ago. "It took a lot of planning over the last few months to bring this about," Kingman Fire Chief Chuck Osterman told the crowd of about 50 people who attended the groundbreaking.