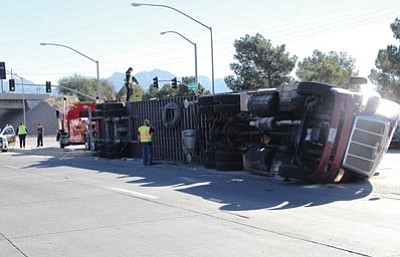 A semi-truck that overturned on the Interstate 40 exit as the driver was trying to turn onto Beale Street had traffic jammed for hours starting Friday morning. The accident occurred around 10:45 a.m. but wasn't completely cleared until early evening. Kingman Fire Battalion Chief Bill Johnston said the semi's load of produce shifted during the turn, causing the trailer to flip onto its side.