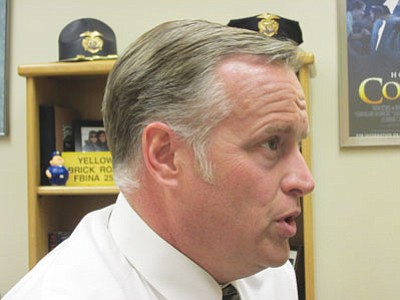 Kingman Police Capt. Rusty Cooper speaks with a volunteer Thursday. Cooper, a recent graduate of the FBI National Academy, will become the KPD’s deputy chief on July 1. The yellow brick in the background signifies that Cooper completed a grueling obstacle course to finish up his physical training.DOUG MCMURDO/Miner

On his desk is a yellow brick. It isn't gold, but Kingman Police Capt. Rusty Cooper treasures it just the same.The brick signifies that Cooper completed a grueling 6.1-mile obstacle course through a hilly, wooded trail the Marines built at the FBI Academy in Quantico, Va. For a man of 47, the feat was a personal triumph and one that added meaning to his time at the FBI National Academy. The fact that this final test was entirely voluntary makes it that much sweeter.