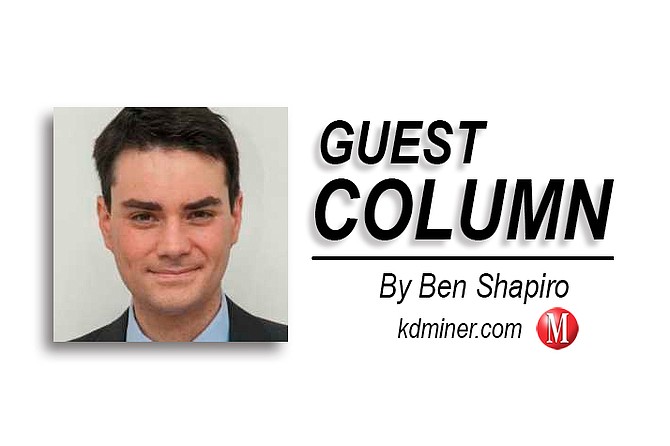 Column | When we broaden the definition of incitement, freedom suffers

Column | How Democrats learned to stop worrying and love federalism

Suddenly, some Democrats have realized that they are not fated to rule forever – and that powers handed to the federal government by Democrats can be turned against Democrats, too.

Column | What do we have in common?

We Americans are in the midst of a serious division regarding our own character: Was America and the West founded on fundamentally good and eternal principles, principles we’ve sometimes failed to live up to, of course, but principles worth fighting for?

This week, Judge Brett Kavanaugh was hit with accusations of sexual abuse from Christine Blasey Ford, a professor at Palo Alto University.

Guest Column | When government becomes everything, everything becomes crazy

With the media furiously obsessed over the supposed imminent end of the Trump presidency (spoiler alert: nope), the new conversation among the elite concerns the supposed evils of Vice President Mike Pence.

Column | Trump needs more than his base for midterms

There seem to be two main factors in the United States when it comes to voting. Neither has much to do with policy. The first factor is party identification ... The second factor is personal likability of a candidate ...

Column | What if everybody is just bad at everything

In the last two weeks, the Trump administration has begun to make a rather interesting legal argument: Collusion isn’t criminal.

“So, how are you planning to pay for that?”

Take, for example, President Trump’s tariff policy. Trump believes that “Tariffs are the greatest,” according to one of his tweets this week. Not only are they the greatest; they prevent us from becoming the “‘piggy bank’ that’s being robbed.”

Column | What is democratic socialism?

Furthermore, generous welfare policies can only operate in small, homogenous countries because if you open the borders to such countries, immigrants flood in and then sink the boat.

Column | When abortion becomes a sacrament

This week, amid widespread Democratic tumult regarding the selection of a replacement for Supreme Court Justice Anthony Kennedy, alleged comedian Michelle Wolf paid tribute to the most important facet of American life: abortion.

Column | The rise of the Democratic mob

The First Amendment protects Maxine Waters, of course, and it should.

We don’t know what this will be yet.

Column | Supreme Court: Be Polite When You Violate Others’ Rights

Instead, the court ruled that the baker didn’t have to bake the cake because the members of the Colorado Civil Rights Commission were unduly mean.

Column | The suicide of Europe

On Friday, the British police arrested Tommy Robinson, founder and former leader of the English Defence League, a far-right anti-Islam group. Robinson is a controversial character, to be sure, a sort of Milo Yiannopoulos lite. His chief focus is on the threat of radical Islam, which he believes threatens the integrity of the British system.

Democrats seethe but have no new fodder for their ire – and every day that passes with the media chumming the waters and coming up empty drives down enthusiasm even more.

Obama and his staff lied repeatedly to the American people about the Iran deal – and they continue to lie.

Column | The Death of the Department of Justice and the FBI

Cohen has openly stated that he paid Daniels to shut up about her peccadillo with Trump – and he has said that Trump had no knowledge of the payment.

Column | A new kind of gridlock

Column | On the Super Bowl and the social fabric

On Sunday, I attended the Super Bowl, along with my father, my business partner and the president of our company. It was an amazing event.

Column | Can a bad man be a good president?

This week, FBI deputy director Andrew McCabe – a man who certainly should have stepped down months ago – finally resigned from his active role at the agency

On Monday, Democrats caved on their manufactured government shutdown.

Column | America’s left in the grip of insanity

If Republicans Don’t Make a Move, They Deserve to Lose

Politics is the art of shifting the playing field.

Column | President Trump and the Politics of Attitude

Column: Both sides ready to blow up democracy

One of the great lies of the 21st century is that republicanism and freedom are inevitable.

Column: Will conservatives stand up to Trump if they must

Here’s an alternate-reality scenario. It’s 2016, and the president-elect of the United States is ready to take office.

When Mitt Romney lost in 2012, there was very little discussion of blame. Everyone assumed that Romney simply lost because he didn’t do a good enough job of convincing voters to punch the ballot for him.

We have nothing left to hold us together

On a recent Friday, a South Carolina high school stopped students from bringing American flags to a football game against a heavily Hispanic rival school. Why? The principal was presumably worried that waving the flag might offend the Hispanic students.

After over two decades in the heart of America’s spotlight, Hillary Clinton is still an unknown quantity for most Americans.