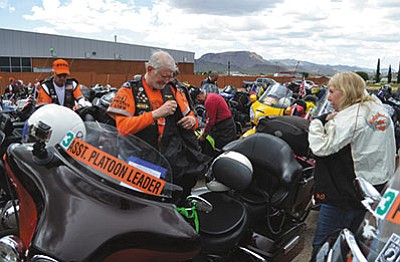 Some participants in Run for the Wall, an annual motorcycle ride from California to Washington, D.C., in support of veterans, claim the Kingman Police Department disrespected them when they came through Kingman May 18. Deputy Police Chief Rusty Cooper said the department didn’t allow the group to conduct its own traffic control because it lacked the proper permits and insurance. (AARON RICCA/Miner)

Lack of permit, insurance sparked Run for the Wall trouble

KINGMAN - It wasn't a lack of support that kept Kingman Police from playing escort and traffic controller to hundreds of motorcyclists that rode through town May 18 as part of the nationwide veterans event known as Run for the Wall.

By Doug McMurdo May 27, 2016
Tweets by @DailyMiner
Event Calendar