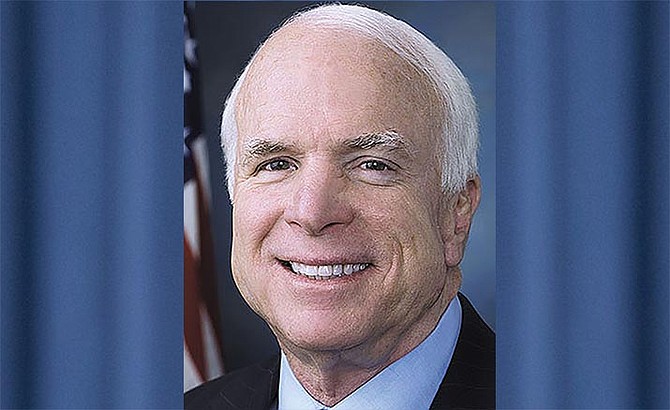 John McCain has served Arizona for many terms, elected by the people of Arizona. He continues to serve with integrity and concern for a growing disregard for law, and the very principles on which this nation was founded and became great.

Despite cancer, McCain’s maverick ways press on in tweets

Sen. John McCain's legacy was thrust into focus nearly one year ago when he announced his brain cancer diagnosis. The six-term Senator and decorated Vietnam War veteran is now fighting the illness from his beloved Arizona, and filling the role of one of the few Congressional Republican voices to publicly rebuke Trump administration decisions.

Republican Sen. John McCain on Monday expressed thanks for the overwhelming support as he battles brain cancer

Sen. McCain diagnosed with brain tumor after clot is removed

Sen. John McCain, the 2008 Republican presidential nominee, Vietnam prisoner of war and political maverick in Congress for more than three decades, has been diagnosed with an aggressive type of brain tumor.

Democratic U.S. Rep. Ann Kirkpatrick and Republican U.S. Sen. John McCain face off tonight in their only debate before next month's general election.