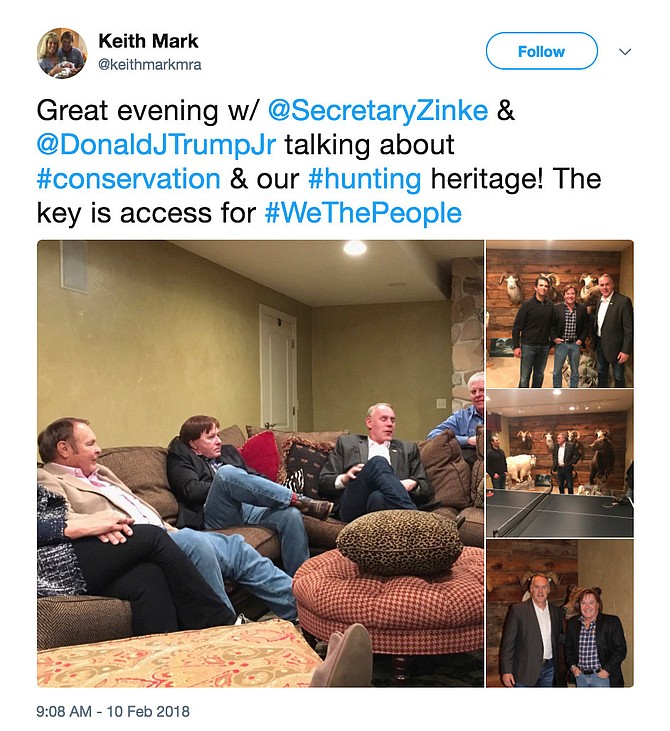 This screenshot of Twitter post from the page of Keith Mark shows photos of Interior Secretary Ryan Zinke meeting with Donald Trump Jr. and Keith Mark. A new U.S. advisory board created to help rewrite federal rules for importing the heads and hides of African elephants, lions and rhinos is stacked with trophy hunters, including some members with direct ties to President Donald Trump and his family. Donald Trump Jr. is friendly with another member of the advisory council _ hunting guide and TV show personality Keith Mark. He helped organize Sportsmen for Trump during the 2016 presidential campaign and recently posted photos on his Twitter page of himself with Trump Jr. and Zinke, standing before an array of mounted big-horn sheep and a bear. “I see the world from a hunting lifestyle,” Mark told the AP, adding that he has no preconceived agenda for his service on the conservation council. “It’s the most pure form of hands on conservation that there is. I will approach all decision-making with my background.” (Twitter via AP)

Big-game hunters tapped by the Trump administration to help rewrite federal rules for importing the heads and hides of African elephants and lions as trophies defended the practice Friday, arguing that threatened and endangered species would go extinct without the anti-poaching programs funded in part by the fees wealthy Americans pay to shoot some of them.