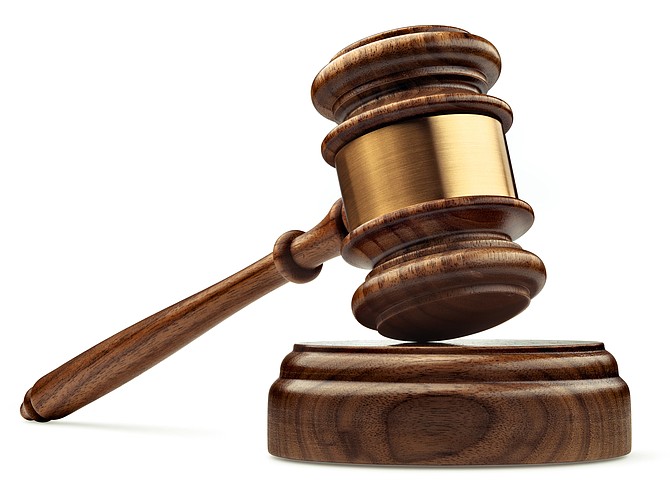 An attorney for an Arizona real estate developer who was referred to the Department of Justice for a criminal investigation along with a former Trump administration Cabinet member by Democrats on a congressional committee demanded Thursday that he be allowed to publicly rebut the allegations against his client.

A judge has sentenced a 21-year-old Phoenix man to more than six years in federal prison after he pleaded guilty to charges related to a human smuggling operation he was running that led to a fatal crash involving a driver he recruited via Snapchat.

Local justice courts in Kingman, Bullhead City, North Canyon and Lake Havasu City are now receiving state funding under Proposition 207, but now a new budget fund will be needed to store that funding.

Arizona Gov. Doug Ducey's in-house lawyer has dropped her bid for the Republican nomination as the top prosecutor in Maricopa County.

The Maricopa County Board of Supervisors on Wednesday chose one of the three Republicans running to replace former County Attorney Allister Adel to temporarily fill her post, a move that gives longtime prosecutor Rachel Mitchell incumbent status and a leg up in August's GOP primary.

The Arizona Supreme Court on Thursday ruled that the state's voters do not have the right to reject a massive income tax cut approved by the Republican-controlled Legislature and Gov. Doug Ducey last year.

Arizona victims of long-ago child sex abuse can proceed with lawsuits against groups like the Boy Scouts of America after the state Supreme Court rejected claims that a state law extending victims' right to sue was unconstitutional.

The man charged with opening fire on subway riders on train in Brooklyn was ordered held without bail Thursday at his first court appearance, where prosecutors told a judge he terrified all of New York City.

The Arizona Supreme Court declined Tuesday to consider a request by the Arizona Republican Party to eliminate the early voting system used by 90% of the state's voters and require nearly all voters to cast ballots in person on Election Day.

The Arizona Supreme Court on Tuesday revived a lawsuit filed by Attorney General Mark Brnovich against the board that oversees the state's three public universities over a hotel development agreement, giving him the right to try to prove the deal doesn't benefit taxpayers.

The Arizona Court of Appeals has ruled that state officials were wrong to put a woman who legally used medical marijuana while pregnant on an employment-related list indicating she had neglected a child through prenatal exposure of her infant.

Judge rescues Arizona GOP lawmakers from pickle of their own making

A judge in Prescott has saved Republicans in the Arizona Legislature from a political mess they created when they repealed elections for political party precinct committeemen and set off a firestorm among Republican party activists.

Judge rescues GOP lawmakers from pickle of their own making

A judge in Prescott has saved Republicans in the Arizona Legislature from a political mess they created when they repealed elections for political party precinct committeemen and set off a firestorm among Republican party activists.

A longtime bookkeeper for two Tucson-area construction companies and a homeowner’s association in Mexico has been indicted for allegedly embezzling more than $5 million from the businesses, according to authorities.

A federal appeals court has revived a claim in a lawsuit that alleged the U.S. Bureau of Indian Education has failed to provide basic education services for Native American students at a school deep in a gorge off the Grand Canyon.

Prosecutors in Arizona's most populous county have dropped nearly 200 criminal cases because charges were not filed before the statute of limitation expired.

A judge dismissed the sex abuse lawsuit against Britain's Prince Andrew on Tuesday, three weeks after lawyers for the American woman who filed it reached a deal calling for the prince to make a substantial donation to his accuser's charity and declare he never meant to malign her character.

Bill would make it harder for bar to discipline lawyers

Arizona Senate Republicans have voted to require the state bar to pay attorney fees and other costs if the bar seeks to discipline a lawyer and ends up losing.

Arizona Supreme Court: Jeep can be sued over girl's death

The family of a little girl who was killed when her mother's car was rear-ended by a Jeep on a Phoenix freeway can sue the SUV's manufacturer for wrongful death because it did not install automatic emergency braking devices that were available as optional equipment, the Arizona Supreme Court ruled Tuesday.

A Lake Havasu City woman was sentenced in federal court for voting more than once in the 2018 federal election.

GOP lawsuit looks to throw out absentee voting in Arizona

The Arizona Republican Party is asking the state Supreme Court to strike down the vote-by-mail system used by 90% of voters in a battleground state that will be crucial to determining which party controls the U.S. Senate after the 2022 election.

A judge this week declined Secretary of State Katie Hobbs' request for an order blocking Arizona's attorney general from prosecuting her if she temporarily shuts down a candidate signature portal for a required update.

Republican lawmakers are urging the Arizona Supreme Court to immediately rule that a voter-approved tax on the wealthy can’t be enforced, saying the high court already found a key provision unconstitutional and a trial court judge is needlessly delaying issuing a ruling that would effectively kill the measure aimed at funding schools.

Airman to be sentenced in Arizona in Mennonite woman's death

An Air Force airman convicted of kidnapping a woman from a Mennonite community in New Mexico and fatally shooting her in northern Arizona is set to be sentenced Wednesday.

Far-right social media personality Tim Gionet, who calls himself “Baked Alaska,” was sentenced to 30 days in jail Thursday for misdemeanor convictions arising from an encounter in which authorities say he shot pepper spray at an employee at an Arizona bar.

The Republican-controlled Arizona Legislature's argument that it alone can decide whether laws it enacts pass constitutional muster fell so flat that the Arizona Supreme Court reached back to a landmark 1803 U.S. Supreme Court decision to remind lawmakers that courts do in fact interpret whether laws violate the constitution.

The Republican-controlled Arizona Legislature's argument that it alone can decide whether laws it enacts pass constitutional muster fell so flat that the Arizona Supreme Court reached back to a landmark 1803 U.S. Supreme Court decision to remind lawmakers that courts do in fact interpret whether laws violate the constitution.

Elizabeth Holmes saga still has some loose ends to resolve

A jury has ended the suspense surrounding the fraud trial of former Theranos CEO Elizabeth Holmes by finding her guilty on four of the 11 charges facing her, but some issues in the legal drama remain unresolved.

An Arizona appellate court has upheld a lower court's decision to deny a request for COVID-19-related medical records it said could include information that should be kept private.

The attorney representing the private company that oversaw the Arizona Senate’s partisan review of Maricopa County's 2020 election results is trying to quit after a series of losses in cases brought by groups seeking records of the “audit.”

A Phoenix real estate attorney has been disciplined for filing eviction cases last year against Arizona renters who were protected by the federal CARES Act.

Jurors on Thursday convicted a suburban Minneapolis police officer of two manslaughter charges in the killing of Daunte Wright, a Black motorist she shot during a traffic stop after she said she confused her gun for her Taser.

A law enforcement union has filed a lawsuit challenging a $45 health insurance surcharge imposed each pay period on Pima County employees who haven’t received the coronavirus vaccination and haven’t been granted exemptions.

An attorney for the Senate warned the Court of Appeals Wednesday that if the judges force public disclosure of records related to the audit of the 2020 election it will undermine the ability of lawmakers to do their jobs.

A longtime pilot for the late financier Jeffrey Epstein resumed his testimony at Ghislaine Maxwell's sex trafficking trial Tuesday, saying that the British socialite charged with helping the financier find teenage girls to sexually abuse was “Number 2” in the hierarchy of Epstein's operations.

A murder charge has been dismissed for a California divorce lawyer in the suburban Phoenix shooting death of his stepdaughter’s husband nearly 11 years ago.

Jurors on Wednesday convicted the three white men charged in the death of Ahmaud Arbery, the Black man who was chased and fatally shot while running through their neighborhood in an attack that became part of the larger national reckoning on racial injustice.

A judge Monday refused to have a hearing on a bid to quash the chance for the public to vote on whether they approve of $1.9 billion in tax cuts approved by the Legislature.

Shortly after the Arizona Supreme Court created a task force on countering disinformation in 2019, its members realized their approach was a losing battle.

he defendants are scheduled to go on trial in August 2022.